3 STAGES OF THE HEART – THE THIRD IS THE BEST 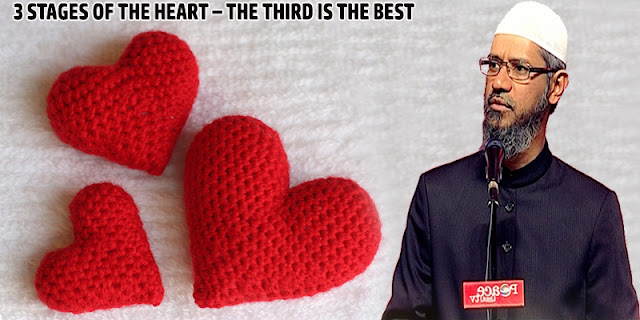 The great scholars ibn al Qayyim and al Ghazzali emphasized a lot of purification of the heart, because having a pure heart is necessary for reaching excellence in worship.

If the heart is corrupted, every act of worship becomes corrupted, and our whole life becomes tainted. Both these great scholars categorized the heart into three types, or three stages based on Quranic verses.

STAGE ONE: THE DEAD HEART

It becomes completely heedless, and it will go wherever its desires want it to go. Allah said about people with this kind of heart in the Quran:

Their example is that of one who kindled a fire, but when it illuminated what was around him, Allah took away their light and left them in darkness [so] they could not see. Deaf, dumb and blind – so they will not return [to the right path]. (2:17-18)

When does Allah seal the heart of His slave? When the slave becomes too immersed in transgression, Allah makes his path towards transgression easier.

In their hearts is disease, so Allah has increased their disease; and for them is a painful punishment because they [habitually] used to lie. (2:10)

Therefore the death of their heart is their own fault.

And [We cursed them] for their breaking of the covenant and their disbelief in the signs of Allah and their killing of the prophets without right and their saying, “Our hearts are wrapped”. Rather, Allah has sealed them because of their disbelief, so they believe not, except for a few. (4:155)

This is a very very scary thought! We must make sure we never ever reach this stage.

In this stage the heart is not yet dead, but is affected with disease. A heart could have varying intensities of sickness, from mild to severe.

Allah gives the following parable in the Quran:

Or [it is] like a rainstorm from the sky within which is darkness, thunder and lightning. They put their fingers in their ears against the thunderclaps in dread of death. But Allah is encompassing of the disbelievers. The lightning almost snatches away their sight. Every time it lights [the way] for them, they walk therein; but when darkness comes over them, they stand [still]. And if Allah had willed, He could have taken away their hearing and their sight. Indeed, Allah is over all things competent. (2:19-20)

Allah is giving a warning to those with a sick heart, that if Allah wished, He could have put a seal on our hearts and put us in stage one, but he hasn’t done it yet, and so we should treat our disease as soon as possible.

This is the heart which is pure. It is free of any kind of disease. It loves its Lord and loves obeying Him. It finds doing good deeds easy and is horrified and disgusted with disobedience.

The day on which neither wealth nor sons will be of any use, except for whoever brings to Allah a sound heart. (26:88-89)

This is the stage that we all want to reach.