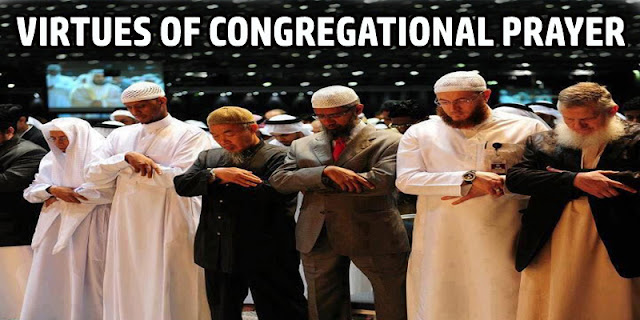 There are many virtues of performing prayers in congregation, and Prophet Muhammad (pbuh) stressed its importance in many instances. Here are five reasons why every Muslim brother should stop praying at home and start coming to the Mosque.

IT IS TWENTY SEVEN TIMES THE REWARD

The Prophet ﷺ informs us in the authentic narration that the obligatory prayer in congregation is better than an individual prayer by twenty seven times.

Another narration labels it as twenty five times better. Regardless, you get the point, it’s extremely more virtuous.

THE ANGELS WILL PRAY FOR YOU

In an incredibly amazing narration of the Prophet (pbuh), he says that the Angels will continue to supplicate for the one who remains in his prayer position so as long as he remains in Wudu’.

The Messenger of Allah (pbuh) said,

“The angels supplicate in favour of one of you so long as he remains in the place where he has performed Salat (prayer) in a state of Wudu’. They (the angels) say: ‘O Allah! Forgive him, O Allah! Have mercy on him.”‘

IT IS A SAFEGUARD FROM HYPOCRISY

The Prophet warned us specifically that the hardest prayers upon the hypocrites were the Isha’ and Fajr congregational prayers. Nevertheless he advised us that had they known what was in them both, in terms of virtues and reward, they would have came to pray them even if they had to crawl.

‘The most burdensome prayers for the hypocrites are the ‘Isha’ prayer and the Fajr prayer. If only they knew what (reward) there is in them, they would come to them even if they had to crawl.'”

YOU GET REWARD OF PRAYING THE WHOLE NIGHT

Speaking of Isha’ and Fajr prayer, the Prophet (pbuh) informed us that if anyone were to pray Isha’ in congregation, he would be rewarded for praying half the night, and if he were to follow it up with Fajr in congregation, it would be as though he has prayed the entire night.

IT FORGIVES YOUR SINS AND ELEVATES YOU

The Prophet informed us that one of the ways to have our sins removed and our ranks elevated is through increasing our footsteps to the Masjid.

‘Shall I not tell you of something by means of which Allah expiates for sins and increases good deeds?’ They said: ‘Yes, O Messenger of Allah.’ He said: ‘Performing ablution properly despite difficulties, increasing the number of steps one takes towards the mosque and waiting for the next prayer after prayer.’

These are just five of the many virtuous reasons why you should be praying in the Masjid. It’s never too late to start.

May Allah make us of those who regularly attend His houses. Ameen.