The 10 Commandments of Musa (AS) in the Quran 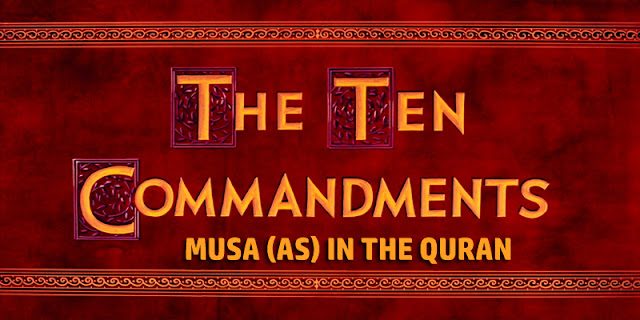 The Arabic word for what the Judeo-Christian literature call “commandments” is “wasiya”– which literally translates to “will.” It is like the will of the prophets (peace be upon them) for their followers that they have left. A will is to be acted upon and is a summary of the most important things that one wants their inheritors to do after their death.

Abdullah ibn Masud (radi Allahu anhu) actually said, Whoever wishes to ascertain the will of Prophet Muhammad on which the Prophet has put his seal, let him read the Statement of God . . ., and then he recited the three verses. [Narrated by Tirmidhi] This is the will of our beloved left as a bequest for us.

So, what are they? Allah summarizes the 10 commands in the 151st-153rd ayaat of Surah al-An’aam

1) Do not ascribe anything as a partner to Him.

The first commandment is that upon which all the Prophets called to first. It is to not ascribe any partners to Allah whether in our beliefs, words or actions. It is to believe solely that Allah is the One who created and sustains this earth, that He is the source of benefit and that He is deserving of our worship. It also entails that we do deeds seeking only His favour and not anything of His creation. Allah is Self-Sufficient, and we are not to put anything else between us and Allah.

2) Be good to your parents.

3) Do not kill your children in fear of poverty– We will provide for you and for them.

Allah specifically mentions the killing of children, but in it implicit is the message that Allah provides for all of us. It is a lesson in putting our trust in Allah during the hard times, and keeping our faith even when things are impossible. Allah will provide- it is a promise, and Allah delivers on His promise

4) Stay well away from committing obscenities, whether openly . . .

5) . . . or in secret. This is a clear order to stay away from both public and private sins.

6) Do not take the life God has made sacred, except by right.

Allah declares that human life is sacred. This abolishes any form of indiscriminate killing or mutiliation that sometimes are done in the name of Islam.

7) Stay well away from the property of orphans, except with the best [intentions], until they come of age.

This commandment is specifically about the orphan, but implicit in it is also respecting the rights of the weak in society. One of the shining characteristics of the Prophet peace and blessings be upon him is the fact that he always stood up for the rights of those no one cared about. No matter what, never look down upon an orphan, a beggar or anyone we think is “low”. We should give them their due right, and help them as much as possible

8) Give full measure and weight, according to justice– We do not burden any soul with more than it can bear.

Allah exhorts us to be honest in our dealings with people.

9) When you speak, be just, even if it concerns a relative.

10) Keep any promises you make in God’s name.

Allah then further tells us to be just, and to keep our promises.

After Mentioning The 10 Commandments Allah says:

This is what He commands you to do, so that you may take heed’. this is My path, leading straight, so follow it, and do not follow other ways: they will lead you away from it–‘

These are commands for us that would suffice us in the journey of life. Allah has summarized them for us. In short, it is about our character- to our Lord and to those around us. The Prophet peace be upon him said, ‘I have been sent only to perfect good character.’ [Narrated by Ahmad]