Social Productivity: Who Wants to Be a Muslim Millionaire? 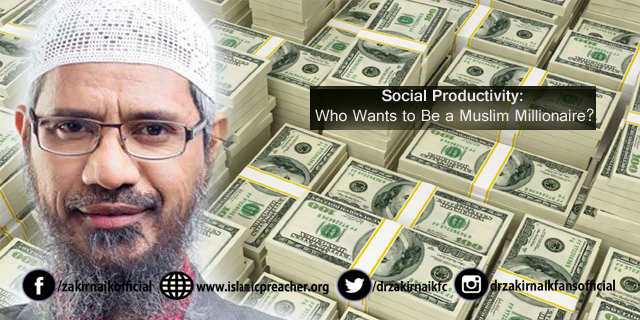 Have you ever wondered how YOU can make a real difference and be socially productive during Ramadan? Why not start with Islamic Relief’s Make a Million campaign?

Everyone wants to be a Muslim Millionaire, and here’s the SECRET FORMULA on how to gain a reward worth millions this Ramadan. GIVE in charity and be socially productive. It is shocking and deeply saddening that 1 in 8 people will go to bed hungry every night, despite the fact that there is enough food in this world for everyone. Ramadan is an optimal time to feel and step into the shoes of those who go hungry around the world. It is also the blessed month with the opportunity to practise the many Prophetic traditions, one of which was to be extra generous and give in charity as the Prophet (pbuh) would do, even to the extent that of borrowing borrowed money to help others!

It is no doubt that the Muslim Ummah is going through a challenging time, one of adversity and where millions are suffering from a lack of food – literally on the brink of starvation from war, natural disasters, conflict among other causes. But people don’t need to live in this dire state in the 21st century because there is enough food for everyone in the world. In a bid to follow the Prophet’s example, we should feel it is our moral obligation and duty to contribute whatever we can. Islamic Relief’s Food Solutions ensure that some of the world’s most deprived can have access to food this Ramadan. Prophet Muhammad (pbuh) advised us with the following words: “Save yourself from Hell-fire even by giving half a date-fruit in charity.” [Bukhari]

This is where the Make a Million Campaign comes in!

For some of you, making a ‘million’ probably seems like an unthinkable number (it does for me!) But when we focus on the resources we have, place faith into action and mobilise our friends, family and colleagues to take part in this excellent initiative and give whatever they can, then making a million does not seem so hard! The Prophet (pbuh) said: “Wealth does not diminish by giving Sadaqah (charity).” [Muslim]

Therefore our charity is actually a source of manifold reward. In some sense, it teaches us that even the small amount of charity we give with a sincere heart can equate to the million dollar!

Here are the simple steps to join the Make a Million campaign:

4. Come up with CREATIVE ways to fundraise! (A cake bake for iftar? Sell some unwanted clothes? Do a sponsored silence?)

5. FUNDRAISE the hundreds which will multiply to help us reach a MILLION.

7. THANK everyone who participates with a ‘Thank You for helping us Make a Million’ text.

Be socially productive this Ramadan by taking on the Make a Million challenge and helping us reach our target so we can feed the world’s poorest.