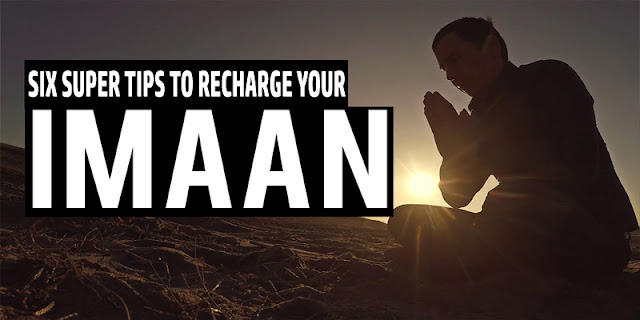 Ever felt like you’re having an Iman dip? That after being a very active, productive Muslim – praying on time, reading Qur’an frequently, always looking forward to doing good deeds – you are becoming lazy and that your enthusiasm to perform the same way is fading?

Life is full of ups and downs, and the downs are sometimes powerful enough to distract us and lower our enthusiasm. Yet, there are easy solutions that can help us get over an Iman low. Here are some tips that can help you refresh your Iman in sha Allah:

1) Have the will to start again

Of course you’ve heard of the saying: where there is a will, there is a way. As cliché as it sounds, the reality is: nothing will change unless you decide to take action. It all starts within you: if you want to be active, you will be active and nothing will stop you in sha Allah. Just take the decision not to surrender to your desires, make du’aa to Allah to help you stick to your decision and watch how everything will go as you wish and even better, in sha Allah!

2) Do not neglect your salah

Whatever happens, even if you pray it with wavering concentration, do not stop praying; especially salatul Fajr and Isha. Abu Hurairah reported that the Messenger of Allah(pbuh) said:

“No prayer is more burdensome to the hypocrites than the Fajr (dawn) prayer and the ‘Isha’ (night) prayer; and if they knew their merits, they would come to them even if they had to crawl to do so.” [Bukhari and Muslim]

Nobody wants to be like those described as hypocrites. Remember, you are good and you’re just trying to get back to what you used to be. It’s alright to take a break from other productive activities once in a while to renew your enthusiasm, but take care to guard your compulsory obligations. Never let them slip!

The Qur’an is the nourishment of every person’s soul, the light of the heart and guidance to the straight path.

“Indeed, this Qur’an guides to that which is most suitable.” [Qur’an: Chapter 17, Verse 9]

Whenever you feel like you are losing your energy and that your performance is starting to drop, quickly turn to the Qur’an and you will always find a way out. The Qur’an explains what a person can do to recharge one’s Iman. Whenever you open the Qur’an: recite at least one verse of it, and look for help in that verse because there is guidance in every verse of the Qur’an.

4) Talk to a religious and knowledgeable person

Allah’s knowledge is limitless as He has explained in this example; that if the water of the seas was ink for the words of Allah, the seas would be all used up before the words of Allah ends. Sometimes in our lives we wish to find that one word of advice in the Qur’an or Sunnah that can increase our Iman but we aren’t able to find it; probably because we’re still young or not knowledgeable enough. Speaking to a religious, knowledgeable person and seeking his/her help can act as a shortcut to what can take us a lot of time to reach. It will definitely help you know exactly what you need to so as to lift up your spirits again.

5) Fast on a random day and do good on it

Unlike any other way of worshiping Allah, fasting usually gives a special feeling of purity to the soul. Most Muslims fast in the month of Ramadan and when it ends they keep waiting for the month to come again, missing that exceptional feeling that it gives.

Muhammad bin ‘Abdullah bin Abi Yaqub said: “Raja bin Haiwah narrated that Abu Umamah said: ‘I came to the Messenger of Allah and said: “Tell me of something that I may take (learn) from you.” He said: “Take to fasting, for there is nothing like it.”‘’ [An-Nasa’i]

Fasting is a great Iman booster especially if you accompany it with doing good to others. Try to be there for people who may be ‘secretly’ asking Allah for your existence, give hope to those who lost it, and smile in those faces that carry grief. When you fast and you get exhausted from helping others that day, the feeling of satisfaction you feel at that moment is indescribable! Try it and feel it yourself!

6) Visualize and read about Paradise

Visualize the reward in the next life for holding on to your faith in this life: imagine Paradise. Imagine its beautiful rivers and palaces, imagine meeting the Prophets and the great Muslims of our past, imagine meeting righteous loved ones who have passed away, imagine never falling ill, never having to struggle or pay for anything, imagine how beautiful you will look, in sha Allah!

“Allah said: “I have prepared for My righteous slaves (such excellent things) as no eye has ever seen, nor an ear has ever heard nor a human heart can ever think of.” [Bukhari]

Isn’t this wonderful promise of Allah a great motivation to bring back your enthusiasm to keep working and doing more?!

Ultimately, remember that Iman lows are very normal and are bound to happen every now and then. But, having read through the above tips, you know they’re easy to deal with. The most important thing is to sincerely have the will to change and to not settle for how you became.