Sadaqah: The Productive Investment of a Lifetime 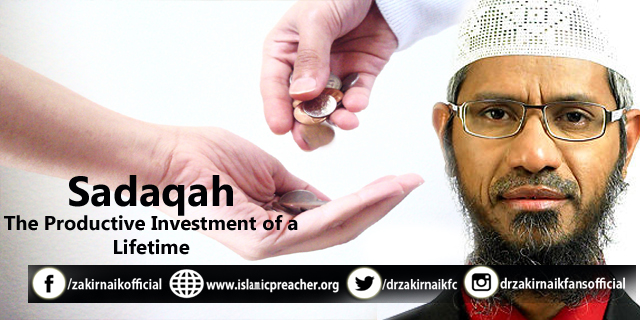 What if you are told about an offer where you can get the product, plus double your money back, plus extra prizes? What would you do? You’d probably immediately text all your friends to tell them about it and then rush down to the shop to make the purchase.

While many of us tend to chase after special offers and reduced prices in this dunya (world), we often overlook the fact that Allah has offered us an even better deal that will benefit us both in this dunya and the akhira (hereafter). What deal are we talking about? Sadaqah (voluntary charity).

The following points show how this noble act can increase our productivity in this life and in preparing for the next.

1. Sadaqah is a guaranteed investment.

‘Who is he that will loan to Allah a beautiful loan which Allah will double unto his credit and multiply it many times?’ [2:245].

The above verse teaches us that by generously giving to the poor and needy, Allah will increase our wealth and blessings in this life, wipe out sin, increase reward and provide shade on the Day of Judgment and more insha’Allah!

What more could we ask for? Money back, profit, good health, barakah (blessings) in our wealth, shade on the Day of Judgement, sadaqah is definitely the best investment for our dunya and akhira.

Forget special offers, reduced prices and buy one get one free deals – a productive Muslim knows the ultimate best way to spend his/her wealth – in the way of Allah.

2. Sadaqah is a means of gaining barakah in your wealth.

It may be hard for us to give sadaqah when we are barely able to make ends meet. However, it is reported in Sahih Muslim that the Prophet(pbuh) said:

Charity does not decrease the wealth and the servant who forgives, Allah adds to his respect; and the one who shows humility, Allah elevates him in the estimation (of the people).”

If we truly believe and apply these hadiths, we will come to learn that we can never lose from giving sadaqah, but instead we gain immensely from it.

However, gaining from sadaqah may not always be in a physical form. When we give sadaqah, it doesn’t necessarily mean that our salaries will increase or we will miraculously stumble upon a goldmine. It may mean that Allah will put barakah into our wealth and possessions instead. By regularly giving sadaqah, we will quickly notice that although we are still spending the same amount of money on the same expenses, we will still have plenty left insha’Allah.

Giving sadaqah can also put barakah in our time and personal matters. We may find that after giving sadaqah, Allah will ease all our affairs.

3. Sadaqah serves as a means of reaping continuous rewards after your death.

When we work for something that will grant us benefit in this worldly life (e.g. a promotion, etc.), we tend to put in a lot of time, effort and sometimes money in order to achieve our goals.

A productive Muslim does the same for the akhira. He/she invests time, hard work and money in activities that will bring great reward, and some that will continue to benefit him even after death.

Why not invest money in building a mosque, digging a well, opening a school, planting a tree or any other form of sadaqah jariyah (ceaseless charity)?

“When a man dies, his acts come to an end, but three, recurring charity, or knowledge (by which people) benefit, or a pious son, who prays for him (for the deceased)” [Muslim].

SubhanAllah. Imagine the reward you will find reserved for you in the akhira, perhaps it will take you to higher and higher stations of Jannah by His Mercy!

Sadaqah is a special offer from Allah that stands as long as we’re alive. Make sadaqah a productive habit this Ramadan, and a habit throughout your life before it’s too late!

”And hasten to forgiveness from your Lord and a garden as wide as the heavens and earth, prepared for the righteous; Who spend [in the cause of Allah] during ease and hardship and who restrain anger and who pardon the people – and Allah loves the doers of good” [3:133-134]

May Allah, The Most Generous, make us from those who give regular sadaqah and may He accept it from us. Ameen.