Here Are Some Kinds of Speech That Islam Prohibits 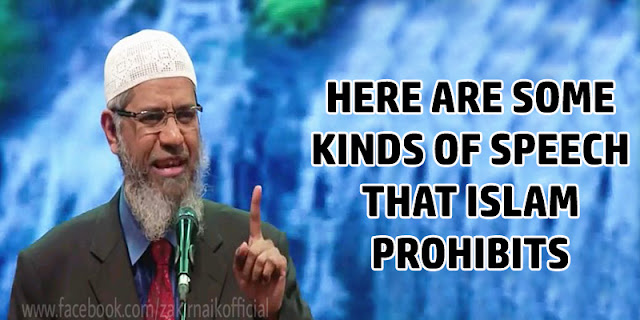 There’s a little piece of flesh in our mouths that’s often taken for granted, yet it’s the one thing that we need to think most about before using it; it can lead us either to hellfire or to the gardens of Paradise.

Try to imagine a world without speech. Perhaps you’ll be reminded of old caveman movies wherein communication was comprised of grunts and groans, not words. Without words we’re deprived of Allah (swt)’s greatest gift— guidance.

Allah(swt)’s guidance has come to us through the language of the Quran and the words of His Prophet (saws). Keeping this in mind, we can only begin to appreciate the blessings attached to our ability to speak.

It’s the capacity to speak that allows us to communicate with our Creator in dua, in repentance, and in remembrance (dhikr). It allows us to recite the Quran, to communicate with our loved ones, to give good advice, to soothe and comfort those in pain, to warn others of the consequence of sin. It’s through our ability to speak that we’re able to spread the Islamic greeting of assalaamo alaikum and to practice good manners, an essential part of our Deen.

MISUSE OF THE TONGUE

We lie, we criticize, we backbite, we use vulgar language, we exaggerate, we falsely accuse others, and we mimic and make fun of people. This kind of irresponsible speech sometimes has far-reaching consequences on the lives of others and can cause great harm and pain.

Just as we’ll be held accountable for all our actions, big or small, so too will we be held accountable for each and every word that comes out of our mouths, whether it’s just an “uff” or a detailed session of backbiting. Allah (swt) warns us, saying, Man does not utter any word except that with him is an observer prepared [to record]. [Quran, 50:18]

This is a frightening prospect indeed; during the course of the day, we say so many things without realizing how harmful they are, passing remarks about people being ugly, fat, stupid, or idiots. We use abusive language.

Worse still are the remarks some people make about Islam, the Quran, about Islamic scholars and Hadith and sometimes about Allah (swt) Himself, never stopping to think that it’s all being recorded and will be presented to us on the Day of Resurrection.

In yet another Hadith, the Prophet (saws) asked one group of his companions, Do you know who the bankrupt person is? They said, A bankrupt person amongst us is the one who has neither money nor property. The Prophet (saws) said, The bankrupt person of my nation is he would come on the Day of Resurrection with prayer and fast and giving great amounts in charity. And at the same time, he would come having abused this one and slandered that one and consumed the wealth of the other unlawfully, and shed the blood of yet others and having beaten others. Then any person whom he has wronged will be given from his good deeds on that Day. And if his good deeds are exhausted until he clears the account concerning all of the people he has oppressed, the sins of those people whom he has wronged will be thrown unto his account and after that he will be thrown into the hellfire. [Muslim]

THE KINDS OF SPEECH PROHIBITED IN ISLAM

The contents of this Hadith tell us that it’s quite possible that our good deeds may not be enough to save us from Allah(swt)’s punishment, if we have used our tongue irresponsibly. So it becomes essential for us first to acquaint ourselves with the kind of speech prohibited by Islam and second to train ourselves to think before we speak.

Here are some kinds of speech that Islam prohibits:

2.Backbiting (forbidden for the speaker as well as the listener)

4.Talking about things that don’t concern us

6.Mentioning the defects of others

8.Verbal abuse 9.Making fun of or mimicking others

11.Denying or making fun of Islam, the Quran, the Prophets, scholars and religious personalities

Abu Hurairah (ra) reports that the Prophet (saws) said, Whoever believes in Allah and the last day, should speak good or remain silent. [Bukharee]

May Allah (swt) accept our repentance for the irresponsible use of this precious gift, the tongue, and may He (swt) make us among those from whom the Muslims are safe. Ameen.