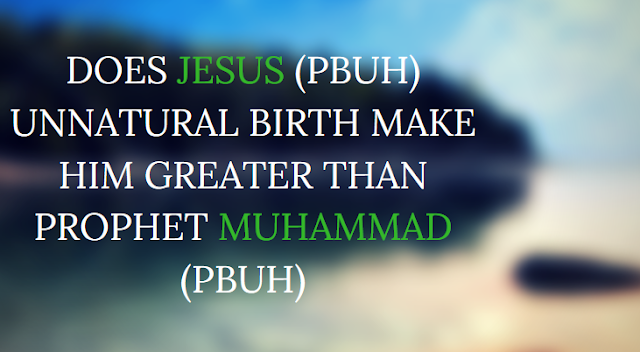 Islam is the only Non Christian faith which makes an article of faith to believe in Jesus (pbuh), we believe that He was one of the mightiest Messenger of Allah, we believe He was a Messiah translated Christ, we believe He was born miraculously without any male intervention, we believe that He gave life to the death with God permission. The Christians and Muslims we are going together but there is parting of faith. The parting of faith is that many of the Christians they claim and they think that Jesus (pbuh) He claim divinity and He was almighty God.

Many Christians say if Prophet Jesus (pbuh) born miraculously, He had a mother but had no father so doesn't it make him superior than Prophet Muhammad (pbuh) indicating that doesn't it make him God. If you say Jesus (pbuh) is superior or you claim Him to be God because He was born miraculously. Allah says in Quran: The similitude of Jesus (pbuh) in front of Allah is the same as Adam (pbuh), He was made from dust and Allah say be and He was. If you say Jesus (pbuh) is God because He had no father in that context according to Quran and Bible Adam (pbuh) had no mother and father that makes Him a greater God.
Nowhere in Quran and nowhere in Bible says that because a person has no father he becomes Almighty God. Allah is the best to create and he wants to show people His power and normally human being is born with the mother and father. We had a example of Adam (pbuh) who was born without a father and mother and we have a last example pending was a person being born without a father which He fulfill in the birth of Jesus (pbuh). We Muslims believe and even the Bible says that Jesus (pbuh) did not die. Allah says in the Quran that He was not kill neither He was crucified but Allah raised Him up unto Himself.

Allah says in Quran that in His second coming He will tell to Allah that You being my witness. I never told them to worship me, i told them worship Allah who is my lord and your Lord and the same thing is mentioned in Bible that in his second coming when people will say ''O Master O Mater'' did we not do the wonders and miracles in your name, He will say O evil men i don't even know you, you depart from here so Allah has raised jesus (pbuh) alive because in His second coming He will not give any new message because Prophet Muhammad (pbuh) is the last and final messenger which is mentioned in the Quran.
After him and after the Quran was revealed nothing new can be added or subtracted from the religion of Islam. He will come as the Ummat of Muhammad (pbuh). He will come not to give any new teaching but to testify to the followers that He never claim divinity and He is the messenger of Allah so the major difference between the Muslims and the Christians is that most of the Christians think that He claim divinity in fact if you read the Bible there is not a single unequivocal statement in the complete Bible where Jesus (pbuh) Himself says that I am God or where He says worship me.

If any christian can point out a single verse in the Bible, a single unequivocal statement where jesus (pbuh) Himself says that I am God or where He says worship Me. I am ready to accept Christianity today. So Jesus (pbuh) never claim divinity but He was one of the mightiest messenger of Almighty Allah.