Being Kind vs. Being Right 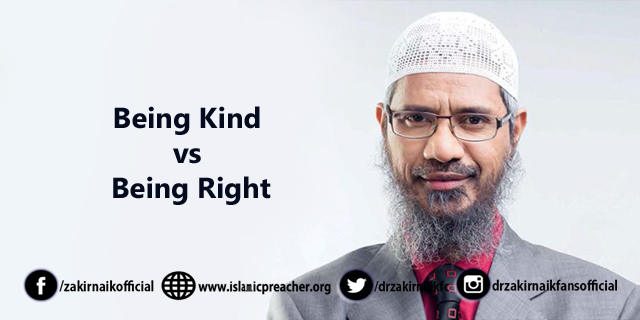 “Invite all to the way of thy lord with wisdom and beautiful preaching and argue with them in ways that are best and most gracious” [16:125].

Being RIGHT vs. Being KIND

Bang! She slammed the door of communication and ran up stairs to her room with tears rolling down her face. “Why don’t they understand this is wrong?” Sadiya said to herself. She had just had an argument with her dad and now the feeling of guilt had overcome her. Instead of bringing him closer to the deen, the argument only led him farther away.

Too often we think we know it all and forget even the basic etiquettes of communication. Was she really winning the point or was her point even being conveyed?

They say, “If you try to win the battle, you might lose the war.” Sadiya has now distanced her father from even listening further. She has been branded and blocked.

Some might disagree with me, but when people are in an argument – what really are they doing?

Each person is trying to change the opinion of the other; but who is really the only one we can change? We all know the answer: ourselves! Although most of us know better, we give it a valiant try to change others anyway because we are just so convinced that they can see the world through our pink glasses.

And if your sense of victory is dependent on another person’s defeat, the victory might be hollow.

So what is the ideal way of communication?

We see in this ayah what the Most Wise has to say about inviting others AND how to “argue.”
Take these structured tips straight from Allah on how to communicate:

Use hikma (wisdom) – press the pause button and focus on the higher goal. Will what I say really get that person to the truth?

Speak in a pleasant way (harshness only works in the army). Look at the example of RasoolAllah(pbyh) and how he dealt with people – and the amount of followers he has.

If you do get in an actual argument, don’t forget being kind – Allah says, “Argue with them in ways that are most gracious.”

Instead of striving to “win,” ask yourself – “Would I rather judge or show someone that I care?”

Victories become empty over time if your need to be right becomes a pattern. Others might distance themselves from you, or feel tense in your presence.  It’s lonely out there!

Don’t pull!  Trying to be right is like putting your fingers into the spiky icing knob you are stuck in. The more you try to pull, the more you hurt.

Think of the most recent conflict you had with someone close to you. Were you focusing on proving how you were right? If so, how would it have gone differently if you focused instead on empathizing with how they felt rather than setting them straight?

So the next time you are close to getting in an argument and want to prove you are right, just think of your finger getting trapped. Remember that a focus on being right ends up making you wrong!

And therefore, “Being KIND is more important than being RIGHT”