A DOOR KNOCK THAT SAVED HER FROM HELLFIRE 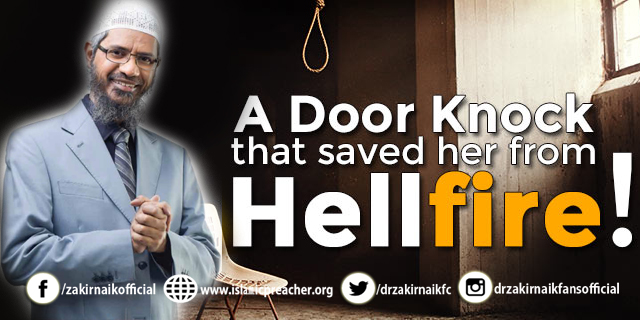 It was Friday, a boy and his father came to the mosque to perform the Friday prayer. After every Friday prayer, Dawah activities took place in the surroundings of that Mosque. So, the boy and his father left the mosque and they had some pamphlets to distribute to people. The boy distributed all pamphlets expect one. He looked around and did not find anyone to give the remaining pamphlet. He headed to a far place from the city and found a home to give that pamphlet.

What happened next, let’s listen from a new Muslim lady that narrates her story; she says:

“I lived lonely and apart from my family. No one was visiting me or kept any sibling relationship with me. I got deeply depressed and full of tensions and decided to commit suicide and finish my life, I went to a shop and bought a rope, tied it to the ceiling fan to hang myself.

While putting the rope round my neck, the door knocked once, twice then thrice, I told myself that I am at last stage of my life, let’s open the door and look who is the knocking person. I opened the door and what was that a ten-year Muslim boy standing, holding a single pamphlet, he greeted me and showed a good attitude. He presented me the pamphlet and said: “Do you know ma’am that ALLAH LOVES YOU!!” As it was the title of that pamphlet as well. The moment I heard these amazing words from his mouth it felt like God sent him to me. I took the pamphlet and sat there & then and started reading it.

It was about Islam, the religion Allah chose for us, for the entire mankind, and what greatness this religion has. I didn’t know when the boy left but his arrival at my doorstep was the turning point of my life. As I was reading it, the tears were rolling down my eyes. Not because of what was written in it, but because of the time this was presented to me i.e. the moments before my death!
This incident made me quit my suicidal mission and search for more answers in regard to that little life changing pamphlet. My quest led me to a nearby Mosque where I met with the Imam of the Mosque and straight away started asking questions about this amazing religion.

The more I asked, the more I fell in love with Islam and eventually accepted Islam as my religion and uttered the testimonial that (There is no true deity except Allah and Muhammad (PBUH) is His Slave and Messenger).”

Who could have ever imagined that a lady, heading straight to hell fire, could have been saved at the very last moment before her suicide? This is what Allah thinks of you all the time i.e. your betterment and good!!

There are many lessons for us in this story. We should know our duties and responsibilities about our religion. We must realize the importance of good upbringing of our children and the significance of Dawah (inviting other to Islam).

Obviously, Allah (SWT) created both mankind and Jinn for many purposes. The basic aim of such creation is to believe in His Oneness and worship Him alone. Besides, He also imposed some duties and responsibilities on mankind. Among such is Dawah.

Dawah is defiantly the most virtues and best deeds in the sight of Allah (SWT). This duty is highly praised both in the Holy Quran and the Sunnah of the Prophet (PBUH).

“And who is better in speech than he who [says: “My Lord is Allah (believes in His Oneness),” and then stands straight (acts upon His Order), and] invites (men) to Allah’s (Islamic Monotheism), and does righteous deeds, and says: “I am one of the Muslims.” (Fussilat: 41:33)
And the Prophet (PBUH) said:

“By Allah, if Allah were to guide one man at your hand, it would be better for you than red camels.” (Al-Bukhari: 7301).

Such authentic proofs indicate and explain the importance of Dawah and its greatness. These also point out the greatness of those who invites or call others to the true religion of Islam.

It is obligatory for every Muslim, whether male or female to invite to Islam and spread the true message of Islam in all walks of life and in every corner of the world. Such great work guides and reforms the humanity. Surely, whoever invites non-Muslims or guides the sinners to the Right Path will receive countless rewards. Because this world and all that it contains will perish but the reward of good deeds will remain permanent with our Lord and He will recompense us with it. Guiding other to the Way of Allah will lead us to Paradise and His Good Pleasure. As Muslims, we should learn Islam and act accordingly to its laws and principles. This will help us to invite others easy to our religion and gain immeasurable rewards both in this world and in the Hereafter.