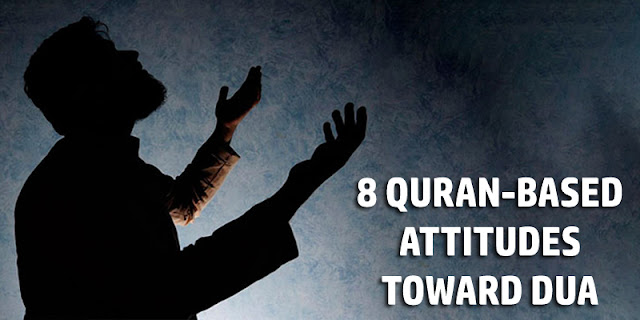 What does the Quran teach us about dua? Apparently it’s not as simple as asking for a favour. The Message assumes that we approach dua with certain necessary attitudes— and that we leave it positively transformed. Let’s take a brief survey.

1) Speak Only to the One Who Will Answer.

It’s difficult for we mere humans to grasp, but the idols that we can see and touch are powerless to aid us, whereas the one who responds to our supplications can’t be physically sensed. Remain true to tawheed and remember that nothing is comparable to Allah (swt).

And those you call upon besides Him are unable to help you, nor can they help themselves. [Quran, 7:197]

2) Be Hopeful, Reverent, Humble, and Submissive.

So We responded to him, and We gave to him John, and amended for him his wife. Indeed, they used to hasten to good deeds and supplicate Us in hope and fear, and they were to Us humbly submissive. [Quran, 21:90]

And We had gripped them with suffering [as a warning], but they did not yield to their Lord, nor did they humbly supplicate, [and will continue thus] [Quran, 23:76]

Call upon your Lord in humility and privately; indeed, He does not like transgressors. [Quran, 7:55]

3) Make Dua Continuously— Not Just When You’re in Trouble.

Allah demands constant contact with you; He’s not to be forgotten once He’s granted your request.

And when they board a ship, they supplicate Allah, sincere to Him in religion. But when He delivers them to the land, at once they associate others with Him. [Quran, 29:65]

4) Honour Others Who Make Dua.

Those who appeal to Allah on a regular basis form a kind of family. Your family. Don’t ignore them!

And do not send away those who call upon their Lord morning and afternoon, seeking His countenance. Not upon you is anything of their account and not upon them is anything of your account. So were you to send them away, you would [then] be of the wrongdoers. [Quran, 6:52]

5) Rest Firm in Your Belief.

They will say, ‘Did there not come to you your messengers with clear proofs?’ They will say, ‘Yes.’ They will reply, ‘Then supplicate [yourselves], but the supplication of the disbelievers is not except in error.’ [Quran, 40:50]

As we showed in this article, prayer and zakah form a strong partnership!

And establish prayer and give zakah and bow with those who bow [in worship and obedience]. [Quran, 2:43]

7) Be Patient— the Answer Doesn’t Always Arrive Quickly, or in the Form You Demanded.

And seek help through patience and prayer, and indeed, it is difficult except for the humbly submissive [to Allah]. [Quran, 2:45]

8) When He Grants Your Request, Respond With Greater Righteousness.

Knowing that The Compassionate responded to your prayer should result in a profound gratitude and increased efforts to live your life in a way that pleases Him.

And [recall] when Moses prayed for water for his people, so We said, ‘Strike with your staff the stone.’ And there gushed forth from it twelve springs, and every people knew its watering place. ‘Eat and drink from the provision of Allah, and do not commit abuse on the earth, spreading corruption.’ [Quran, 2:60]

May your life be lived in such a way as to make your dua acceptable to the only one who’ll respond with an infinite love. Ameen.