5 Scientific Miracles of the Quran 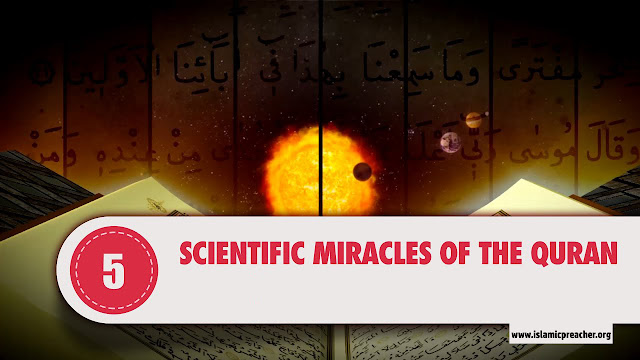 In the Quran, Allah instructs us to reflect on His creation and our surroundings. He says that no one can understand His Ayah or grasp the concepts except the people of understanding. We are encouraged not to read the Quran as just a book, but to delve deeper into its verses and reach their true meanings. If we were skilled in the language of the Quran, we would have tasted the delight of this Book and discovered the miracles of it.

Contrary to the popular criticism that the Quran was a Book of the past or its teachings are not applicable today, we see that this 1400 years old Book explained concepts that became known to us only recently. This in itself is one of the miracles of the Quran.

Let us study a few of them.

Scientists did not know that the sky was a protected ceiling until the 20th century.

Allah says in the Quran, “And We made the sky a protected ceiling, but they, from its signs, are turning away.” [21: 32]

The sky is not only beautiful to look at, but it also plays an important role in our survival. The Sun radiates energy in different wavelengths – the shorter the wavelength, the greater the potential harm. Some of this energy, however, is required for crucial functions such as photosynthesis in the plants and production of Vitamin D in human beings.

Allah designed a mechanism that ensures only harmless rays reached the Earth. This mechanism is what we know as the ‘ozone layer’. The scientists discovered this layer in the year 1913.

That is not all. The atmosphere around us maintains a certain temperature suitable for our living. In absence of this, the temperature would drop down to -270°C and we would freeze to death.

The sky is our protective covering which prevents the celestial bodies from falling on us. Imagine if there was no sky and the stars and the sun were not commanded by Allah to stay at their places, what would have happened? Things would have been falling over our heads and everyday life would have become problematic.

2. MOUNTAINS – HOLDING DOWN THE EARTH

Allah says, “And we placed within the Earth firmly set mountains, lest it should shift with them…” [21:31]

The Earth that we live on is in a constant state of motion. We do not feel it because Allah placed gigantic mountains to hold it down. This fact was unknown until the geologists discovered that mountains have roots deep under the surface of the ground. These roots clench different plates of the Earth like a peg or an anchor to control and prevent it from shaking.

The miracles of the Quran teach us to appreciate the artistry of Allah and acknowledge the things that He has done for us to make our survival possible.

Imagine if there were no mountains, how we would have walked on this Earth when it was constantly shaking? Ask the people who have lived through tremors or aftershocks after an earthquake. There is a constant fear.

3. ORBITS – A SPECIFIC PATH FOR EACH CELESTIAL BODY

“And it is He who created the night and the day and the Sun and the Moon; all [heavenly bodies] in an orbit are swimming.” [21: 33]

One of the beauties of Allah’s creation is that everything works under a proper system. The Sun rises every day at its appointed time. It is not a minute early or late. When it sets, the Moon takes its place and stays there until the early hours of the dawn. After each night, the day takes over.

Similar to the system that is visible to the eye – the galaxies have their own system. The celestial bodies are in well-defined orbits and no one takes the place of another. This has been happening for millions of years since Allah created the universe. One example is that of the Solar System. We know the planets all revolve around the Sun in their own pre-defined paths. Mars does not take the place of Venus and Neptune does not switch positions with the Earth. Even a deviation of a few millimeters can cause a catastrophe in the universe.

The discussion about bodies moving in pre-defined paths did not come up until the 9th century. This theory was researched and revised for many centuries up to the time of Isaac Newton, and even today, astronomers continue to study the universe.

Allah mentioned this fact in the Quran when telescopes and other scientific equipments were not even invented.

4. RAIN – COMING DOWN IN DECIDED PROPORTION

Have you ever wondered, why sometimes there is only a drizzle and on other days a downpour? While some of us might think, this happens by chance, Allah tells us that this happens by His decree.

“And who sends down rain from the sky in measured amounts, and We revive thereby a dead land…” [43:11]

Every second, 16 million tons of water evaporates from the Earth, which means the same amount must be replaced by means of rain. Allah maintains this balance by the process of the water cycle. Even a minor difference can result in a major ecological imbalance.

Allah does not only decide the quantity of rain but also the speed with which it will come down. One can notice the difference of speed when there is a storm and a drizzle. When the rain is heavy, it brings destruction and loss of lives and property. When there is a light drizzle, nothing is affected. Therefore, the Prophet taught us to ask Allah for beneficial rain.

It was in the 16th century when a French hydraulics engineer, Bernard Palissy, discovered the water cycle. In the 19th century, a German physicist, Philipp Lenard, found the correlation between the speed of rainfall and the size of a raindrop.

In Surah Al-Baqarah, we come across an incident where a man is killed but the murderer is unknown. To identify the murderer, Allah instructs hitting the person’s heart with a piece of a cow.

“And (remember) when you killed a man and fell into dispute among yourselves as to the crime. But Allah brought forth that which you were hiding. So We said: “Strike him (the dead man) with a piece of it (the cow).” Thus Allah brings the dead to life and shows you His Ayat (proofs, evidences, verses, lessons, signs, revelations, etc.) so that you may understand.” [2:72-73]

Again, Allah advises us to use our intellect in understanding His signs and the miracles of the Quran.

While this was an extraordinary incident, with the purpose of identifying the murderer, it hints towards massaging or hitting the chest to restart a heart that has stopped beating. This is very similar to present day resuscitating – a medical procedure to revive someone from unconsciousness or apparent death. In this process, pressure is applied to the rib cage at intervals to produce rhythmic contractions in the heart.

The true knowledge is with Allah, but imagine how much we could learn if we are the people of intellect that the Quran talks about?