4 SPIRITUAL BENEFITS THAT PRAYER GRANTS YOU 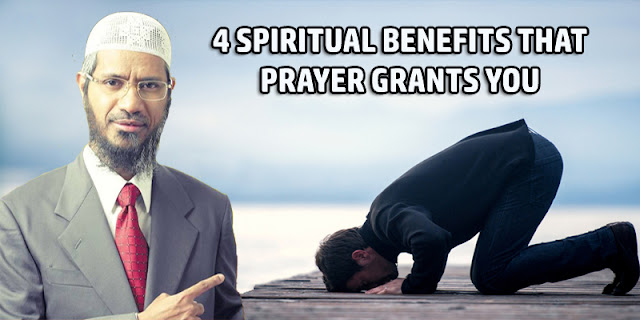 Indeed, I am Allah. There is no deity except Me, so worship Me and establish prayer for My remembrance. (Quran 20:14)

The Islamic prayer is unlike any prayer or form of worship from the other world religions. It is beautiful in its own right because it is designed to worship our Creator, without partner.

However, it is also favorable to the body and each aspect of it carries with it healthful benefits that nourish the human spirit.

As a Muslim, or even a reverted Muslim, you can easily fall in love with the Islamic prayer and fulfill this important act of worship with ease.

1) REFRESH THE MIND AND THE SOUL

Before you can perform the Islamic prayer, you must engage in ritual washing called wudu. It involves washing the hands, mouth, nose, face and limbs.

Now, if you’ve ever been sleepy or worn out and had to splash water on your face to “wake up”, then you will understand how the act of washing before the prayer awakens your senses and revives your mind.

The Prophet Muhammad (peace be upon him) was once asked about it and he said:

If there was a river at your door and you took a bath in it five times a day, would you notice any dirt on you?

“Not a trace of dirt would be left.”

That is the parable of the five prayers by which Allah removes sins. (Al-Bukhari and Muslim)

Since the work day can be lengthy and arduous, performing the ritual washing is truly a blessing as it increases alertness and stamina.

While others might have to rely on caffeinated drinks to stay attentive and prepared for the day, a Muslim can get the same level of focus by simply washing with water prior to each prayer.

2) AN AUDIENCE WITH YOUR LORD

No one ever said this life would be easy. Everyone has problems, some more than others. Yet, no one escapes the trials and tribulations of this earthly existence. It doesn’t matter if you are rich or poor.

Problems and worries have a way of making their way into your life or the lives of loved ones. That’s why many people pay psychiatrists thousands of dollars to help them make sense of our world and find ways to cope with it.

However, within the Islamic prayer, you can find solace by making a connection with your Lord and Cherisher, Allah Almighty. The Prophet Muhammad (peace be upon him) said:

The closest that a servant is to his Lord is when he is in prostration. (Muslim)

From the moment you begin your prayer, you have a one-on-one audience with your Lord without any intercessor to stand between you and Him.

Consisting of standing and bowing, the prayer also involves prostration and this is the closest you can ever be to your Lord. It is also the best time to beseech your Creator for help with whatever issues you are facing and pour your heart out to the One and Only who can deliver relief.

Making supplications, during the prostration, is one of the optimal occasions to ask Allah for assistance.

If you’ve ever seen the Islamic prayer, you might notice that there are a variety of postures during each part of it. Decreed centuries ago by Allah Almighty, the Islamic prayer is a prescription for the body and soul.

Researchers have studied each aspect of the Muslim prayer and determined that the actual movements performed increase the blood flow to the brain and helps with circulation.

The act of prostration, in particular, has been proven to stimulate cognitive processes and reduce high blood pressure.

Overall, it has been proven that the five daily prayers are ideal for helping you maintain a healthy weight and shed fat.

Making the connection with your Lord in prayer and releasing all of the woes occupying your mind is a proven stress reliever that instills a sense of calm in a believer and helps to alleviate the stress associated with daily life. As the Prophet Muhammad (peace be upon him) said:

Whoever humbles himself before Allah, Allah will elevate him. (Muslim)

You don’t need an apple a day to keep the doctor away! Performing the five daily prayers is an excellent prescription for success in this life and the next.

As Muslims, we are not supposed to fit the prayers into our life. Rather, we are supposed to fit our life around our prayers. Remember, Allah created mankind for one reason only:

And I did not create the jinn and mankind except to worship Me. (Quran 51:56)

Any Muslim that has ever performed the Islamic prayer knows that there is something special about it. You might even notice how anxious and stressed out you are before the prayer and how calm you become after its completion. This is a mercy and blessing from God Almighty.

Occupying yourself with the five daily prayers also helps you to stay on track and live a life in accordance with the Quran and Sunnah of Muhammad (peace be upon him).