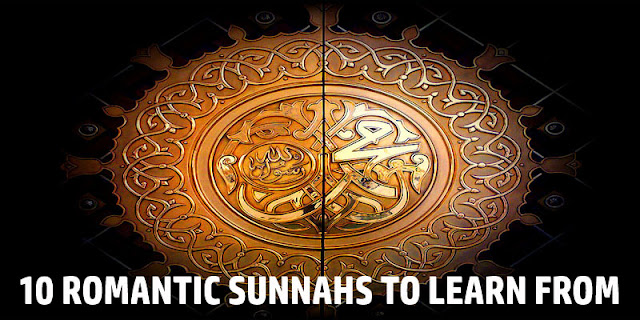 Oftentimes, we see and read stories of couples and their outstanding romantic life. Sometimes, these stories are unrealistic, sometimes exaggerating…

If we examine the life of the Prophet Muhammad (peace be upon him), we’d find it full of instances that we, most of the time, forget to look at and hardly follow.

We know how much he was respectful for women and ordered the companions to be so. He led by example when he said:

I’m best to my wives.

So, let’s look at how the Prophet displayed his love for his wives?

Here are some romantic Sunnahs of the Prophet that we need to adopt:

1- EXPRESS YOUR LOVE IN DIFFERENT WAYS

His love for Aisha was immense.

In one narration Aisha said:

“The Messenger of Allah used to divide his time equally and said: O Allah, this is my division concerning what I control, so do not blame me concerning what You control and I do not.”

Abu Dawud said: By it meant the heart. (Abu Dawud)

“I came to the Prophet and said:

Which people do you love most?

I said: ‘From amongst the men?’

“The Messenger of Allah used to put his mouth on the place where I had drunk from, and he would drink from what was leftover by me, while I was menstruating.” (An-Nasa’i)

How it’s easy to gain rewards in Islam! Just by smiling at your wife or putting a morsel in her mouth, you get a reward. The Prophet (peace be upon him) said:

“You will be rewarded for whatever you spend for Allah’s sake even if it were a morsel which you put in your wife’s mouth.”

How many times do you invite your spouse to trekking or playing a game? Imagine, the leader who used to have plenty of responsibilities, he could find time to share a game with his wife.

“The Prophet raced with me and I beat him.” (Ibn Majah)

What’s the first thing you do when you have an important meeting? Tidying up, using your favorite perfume… why not try these when you’re entering home?

“He would use Miswak (tooth-stick).” (Muslim)

Romantic lovers like to lean on each other’s shoulder or lap. Doing this brings a state of calmness and contentment. Prophet Muhammad used to put his head in Aisha’s lap and recite the Quran.

“The Prophet (peace be upon him) used to lean on my lap and recite Quran while I was in menses.” (Al-Bukhari)

“I and the Messenger (PBUH) took a bath from the same vessel and our hands alternated into it in the state that we had had sexual intercourse.” (Muslim)

It was narrated from Ibn ‘Abbas that his maternal aunt Maimunah said:

“The Messenger of Allah and I used to take bath from a single vessel.” (Ibn Majah)

“The Prophet was screening me with his Rida’ (garment covering the upper part of the body) while I was looking at the Ethiopians who were playing in the courtyard of the mosque. (I continued watching) till I was satisfied. So you may deduce from this event how a little girl (who has not reached the age of puberty) who is eager to enjoy amusement should be treated in this respect.” (Al-Bukhari)

“I did not feel jealous of any of the wives of the Prophet as much as I did of Khadija though I did not see her, but the Prophet used to mention her very often, and when ever he slaughtered a sheep, he would cut its parts and send them to the friends of Khadija.” (Al-Bukhari)

Why it’s difficult for many men to help in the home tasks like cleaning, washing dishes, or fixing up the sink…?

Spare some time to help fixing something in the house, or help in cleaning. The Prophet used to do so.

“I asked ‘A’isha, may Allah be pleased with her, ‘What did the Prophet, may Allah bless him and grant him peace, do when he was with his family?’

“He would do chores for his family, and when it was time for the prayer, he would go out. ” (Al Albani)

10- CALL HER BY HER BEAUTIFUL NAME

The Prophet used to call Aisha by her beautiful name. One day she asked the Prophet:

“O Messenger of Allah, what are the things which are not permissible to withhold?”

She said: “I said: ‘O Messenger of Allah, we know what water is, but what about salt and fire?”