MAXIMIZE USE OF YOUR TIME WITH THESE TIPS FROM THE SEERAH 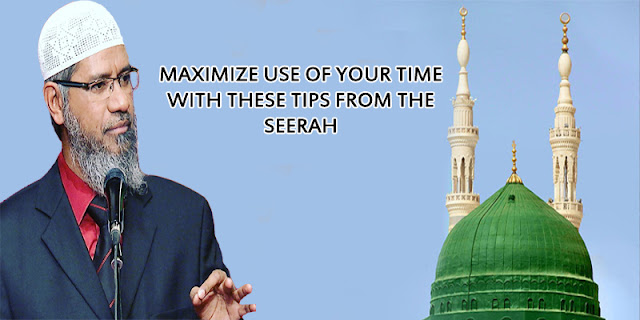 Time is limited. Death is certain. However, our intention to live a productive life and to serve Allah
and His creation will itself be enough to count as a positive action.

If you study the seerah (life of Prophet Muhammad(pbuh)) with specific focus on his daily and regular routines, it is an eye-opener. How meticulous he was in planning every aspect of his day; how he prioritized tasks; how serious he was about keeping his word and how he kept his speech precise and not indulging in idle talk. He was the best of creation, Khayru-l-Khalq, and it is natural we should learn from his example. Below are five lessons on time-management that we can draw from the Prophet’s
enormously productive and purpose-driven life.

1. Be an Early Riser

The Prophet said: “O Allah, bless my nation in their early mornings (i.e., what they do early in the morning).” [Ibn Majah]

Schedule your important tasks earlier in the day, especially those which require mental exercise, and watch the barakah (blessings) from Allah do the magic. If you have problems staying up after Fajr, here’s an article that discusses tips on how you can do just that. In a nutshell, they are:

Go to bed early and rest

Perform the prescribed dhikr (remembrance of Allah) after Fajr

2. Schedule Your Day Around the Five Daily Prayers

It was narrated that ‘Abdullah bin Mas’ud said: “I asked the Messenger of Allah(pbuh) which action is most beloved to Allah? He said: ‘Establishing prayer on time, honoring one’s parents and jihad in the cause of Allah.'” [Sunan an-Nasa’i]

Narrated Al-Aswad bin Yazid: I asked ‘Aisha “What did the Prophet do at home?” She said, “He used to work for his family, and when he heard the adhan (call for the prayer), he would go out.” [Bukhari]

No compromises. The discipline to give up all your work and life’s distractions to perform salah strengthens your willpower to live a purposeful life. Just as you endeavor to be punctual for meetings with your colleagues or project team mates, you should perform your salah on time.

While some of us who are students or working professionals may find it difficult to pray on time, we can overcome this by discussing the issue with your colleagues or friends. If you find yourself constantly finding pockets of time to peform your salah, your khusyu’ will be affected. Performing your salah on time will energize you — once you have fulfilled your most important obligation, the rest will become easy for you.

3. Prioritize and Be Consistent

If we look into the seerah, we can deduce that the Prophet’s day was divided into three main parts.

Spiritual development: This was the time he dedicated solely to Allah. It was typically the late part of the night when the Prophet would recharge himself spiritually for the next day and boost his resolve to face the challenges in his mission. It was during the night that he engaged in intimate communication with his Lord, the Source of all strength and empowerment, through qiyam (night prayer), dua (supplication) and dhikr.

Family affairs: The prophet
was consistent in making time for family matters.

Anas ibn Malik said: “The Prophet, may Allah bless him and grant him peace, was the most merciful of people towards members of his family. He had his son (Ibrahim) suckled in part of Madina and the husband of his wet-nurse was a blacksmith. We used to go to him and the house would be full of smoke from the bellows. He would kiss the child and take him in his lap.” [Al-Adab Al-Mufrad]

Personal/Social affairs: He consistently made time for his followers so no one felt neglected or had their affairs swept under the carpet. This was the time when men and women would come with their personal, marital, financial, spiritual and even health problems. This is when he would receive delegations from other nations and faith group or attend to nerve-racking issues of politics, conflicts and leadership.

Figure out the real priorities in your life. What is worth spending an hour on? What comes first? What is a must-do and what is good-to-do? Allocate time consistently to activities that matter. Unless you plan for and schedule time for community work, studies or attending to parents, your spouse or children on a daily basis, they are not considered important enough to you. Chances are, you will eventually start neglecting these high priority actions.

Prophet Muhammad(pbuh) had a sense of urgency in doing good and warned others against procrastination.

Narrated ‘Uqba bin Al-Harith: Once the Prophet offered the Asr prayer and then hurriedly went to his house and returned immediately. I (or somebody else) asked him (as to what was the matter) and he said, “I left at home a piece of gold which was from the charity and I disliked to let it remain a night in my house, so I got it distributed.” [Bukhari]

Abu Huraira reported Allah’s Messenger having said: Hasten to do good deeds before six things happen: the rising of the sun from the west, the smoke, the Dajjal, the beast and (the death) of one of you or the general turmoil. [Muslim]

Procrastinators do not appreciate time nor the means and the opportunities that Allah gives them to be productive. Each day has its own share of work and each time has its own share of obligations. Therefore, in the Prophet’s life, there was no such thing as idle time. Use every single opportunity to do good. Don’t wait to ‘get old’ to fix your life. If you are not willing to live a purpose-driven, productive life now, then how do you expect to live such a life when you are old?

5. Honoring the Time of Others

Prophet Muhammad was sensitive to his companions’ time and needs. His khutbahs (sermons) were brief, concise and powerful.

Abu Wa’il reported: ‘Ammar delivered to us the sermon. It was short and eloquent. When he (Ammir) descended (from the pulpit) we said to him: Abd al-Yaqzn, you have delivered a short and eloquent sermon. Would that you had lengthened (the sermon). He said: I have heard the Messenger of Allah as saying: The lengthening of prayer by a man and the shortness of the sermon is the sign of his understanding (of faith). So lengthen the prayer and shorten the sermon, for there is charm (in precise) expression. [Muslim]

Similarly, he emphasised the importance of fulfiling one’s promises.

Narrated Abu Sa’id Al-Khudri: Some women requested the Prophet to fix a day for them as the men were taking all his time. On that he promised them one day for religious lessons and commandments. [Bukhari]

It is reported on the authority of Abu Huraira that the Messenger of Allah(pbuh) said: Three are the signs of a hypocrite: when he spoke he told a lie, when he made a promise he acted treacherously against it, when he was trusted he betrayed. [Muslim]

Aim to arrive for meetings, classes and events 10 minutes before they are scheduled to start. If you are running late, inform the other parties. Honoring others’ time is part of fulfilling your promise. Breaking a promise not only causes inconvenience to others, but also causes you to lose their respect. The Qur’an says:

Transforming your life into one that is much more productive, meaningful and enjoyable depends on one instantaneous decision: Managing your time the way our beloved Prophet taught us. Start NOW!

The life of our Prophet Muhammad(pbuh) was an example to us in every way. This article has looked at just a few of those.