5 WAYS TO A HEALTHIER DIET FOR SISTERS 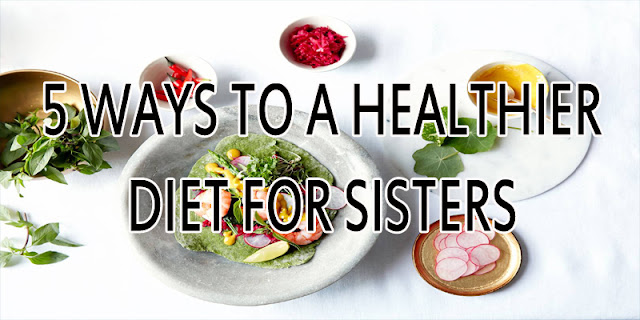 We live in a time in which almost everyone knows the importance of a healthy diet, yet most consider their own way of eating far from the ideal. Unfortunately, when many of us decide it is time to take care of our bodies, we throw ourselves into a super strict regime which places the goal of being ‘healthy’ (no chocolate or sweets… ever) at the centre of our lives, where it eventually begins to dominate it. This approach is rarely effective in the long term and usually results in us burning out (eating nothing but chocolate and sweets…). So, we end up back at the beginning. What now? We take inspiration from this: “The deeds most loved by Allah (are those) done regularly, even if they are small” [Muslim].

With the right intention, caring for our body can be an act of ‘ibadah and taking this approach allows us to put the goal of a healthier diet back in its place, with Allah firmly in the centre. Instead of overwhelming ourselves with impossible goals of flawless (aka joyless) eating, let’s instead focus on bringing some easy habits into our lives which, if maintained, can have a big and positive impact on our health.

Allah has created our bodies in the most perfect way with an in-built system, which tells us when and what we need to eat and when to stop eating it. However, most of us are so used to ignoring these cues that we no longer recognize them. Instead, we outsource this function of our body to things, such as diets which dictate when and what we can eat. Often we are told we need to eat a small meal every 3 hours to avoid becoming hungry and overeating, but hunger is not to be feared – it is simply our bodies communicating their needs to us. The eat every 3 hours ‘rule’ likely originated in the fact that most ‘naturally skinny’ people, i.e. hunger-directed eaters, tend to eat more frequently as they only eat what they need to and stop when they are full. The Prophet(pbuh) himself said: “The son of Adam does not fill any vessel worse than his stomach. It is sufficient for the son of Adam to eat a few mouthfuls, to keep him going. If he must do that (fill his stomach), then let him fill one third with food, one third with drink and one third with air” [At-Tirmidhi].

Supermodels often say they owe their clear skin to drinking lots of water, but the benefits of staying hydrated go far beyond aesthetics. While the exact amount we should be drinking each day is disputed territory, the color of your urine is a reliable indicator of if you are getting enough – if it’s yellow you need more, you want it to be light colored to clear. It is also helpful to keep in mind that it is extremely difficult to drink too much water so make an effort to always carry a large bottle of water with you and sip from it regularly. Another approach to getting your H2O is to drink a large glass when you wake up and a few glasses at every meal. If you’re still struggling, there are free apps which pop up with water reminders throughout the day – worth a try! To liven up your water you can add flavour with fruits, such as a squeeze of lemon juice (which also acts as a mild detox) or experiment with whole fruits such as strawberries and herbs such as mint – the variations are limited only by your imagination.

Ok, so most foods are processed to some degree but what we are talking about here are those products that when you read their ingredients you a) cannot pronounce them, b) they have numbers in their name and/or c) your great grandparents wouldn’t even recognize that as food. Many of these ingredients tend to be preservatives and artificial flavours and colouring. They are usually found in products whose appeal lies in their convenience, such as ready-made freezer meals. These are also enemies to good health, with disease having increased alarmingly since their entry into mainstream consumption. The best way to avoid buying these products is to find alternative ways to deal with those days when ready-made or effortless meals are required. One option is to set aside one day of each month to cook batches of homemade food which can be frozen and reheated when required. Another option is to add some quick and healthy meals to your repertoire such as pizza made using wholemeal flat-bread as a base and served with salad. When shopping, it is helpful to stick to the outer aisles of the supermarket, which is where the least processed foods are displayed.

Vegetables are some of the best things we can put into our body but few of us get the recommended 5 servings a day. To this end, it is helpful to get into the habit of making a side salad for every meal. If that sounds boring that’s only because you haven’t learnt how to throw together a truly epic salad! leafy greens, nuts/seeds, fruit (fresh or dried), vegetables (cooked or raw), meat (or tofu or tempeh for the vegetarians), spices, herbs, cheese and a dressing of your choice – it can be a satisfying meal in itself. An even easier way to sneak more vegetables into your diet is with a green smoothie, which can be had as a snack or a delicious breakfast on-the-go. Green smoothies can be made however you like, but the basic formula is water, fresh juice or milk of your choice as a base, leafy greens such as spinach or lettuce, any fruit you like plus any other addition you want. To ensure the taste and texture of the greens is sufficiently disguised, add a greater portion of fruit, use a high powered blender and enjoy!

Studies have shown that a habit of skipping breakfastis one thing the vast majority of overweight people have in common. This is likely due to it triggering overeating later in the day. But what do you do if you simply do not feel like eating in the morning? Try waiting an hour or so after waking to give hunger a chance to kick in, but if it still hasn’t made an appearance, try something light like a glass of water and a small piece of fruit just to kick start your metabolism. Another common reason for missing breakfast is not having time. In this situation, night-before preparation is key but if that fails, try a healthy on-the-go breakfast, such as a smoothie or some plain yogurt with mashed banana, muesli, nuts, honey and cinnamon.