Value Of Life In Islam 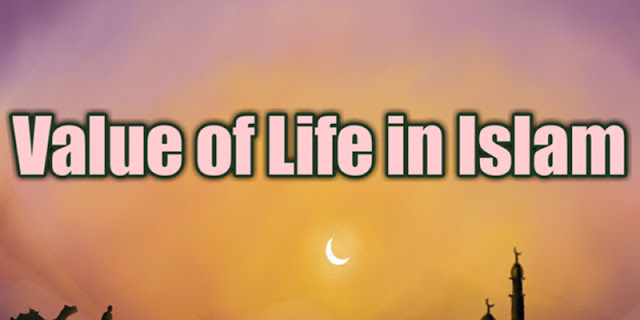 Times are not same always.Ups ad downs are part of life, in fact, they increase the beauty of life. We being humans often get exhausted if put in a trial for a longer time. Some of us have enough stamina and survive longer in harsh times, but some of us get disappointed too early. Disappointed to such an extent that some of us forget the value of life and attempt suicide! The value of life is not that minimal brothers and sisters in Islam!

On the very another hand, we find the other extreme, where people do not value a life of others. Killing or wasting a life is something ordinary. The human race is becoming the reason of its decline. It’s a point of sheer amazement for me when I see the climax of human development resulting into disastrous inventions.

We have explored the science of nuclear physics and apparently used nuclear weapons for our very own benefit and defense. And sometimes we do not fear to test these weapons on our very own kind!

I think that’s the reason, the world needed religion along side science. That’s why ALLAH told us to value our and others lives:

Once a wanted know the value of life, he decides to ask this question to his GOD.

So he went to God and asked, “What’s the value of life?”

God gave him one stone and said, “To get an answer to your question first you have to find out the value of this stone, but keep in mind, don’t sell it.”

The man took the stone to an Orange Seller and asked him what it’s cost would be.

The Orange Seller saw the shiny stone and said, “it looks beautiful, You can take 12 oranges and give me the rock.”

The man apologized and said that the God has asked him not to sell it.

He went ahead and found a vegetable seller. “What could be the value of this stone?” he asked the vegetable seller. The seller saw the shiny stone and said, “See, it’s beautiful but still rock. I can offer you one sack of potatoes in return of this rock.”

The man again apologized and said he can’t sell it.

Further ahead, he went into a jewelry shop and inquired about the value of the stone.

The jeweler saw the stone under a lens and said, “I’ll give you 50 Lakhs for this rock.” When the man shook his head, the jeweler said, “Alright, alright, take two crores, but give me the rock.”

The man explained that he can’t sell the stone. Further ahead, the man saw a precious stone’s shop and asked the seller the value of this rock.

When the precious stone’s dealer saw the big ruby, he lay down a red cloth and put the ruby on it. Then he walked in circles the ruby and bent down and touched his head in front of the ruby.

“From where did you bring this priceless ruby from?” he asked. “Even if I sell the whole world and my life, I won’t be able to purchase this priceless stone.

Stunned and confused, the man returned to the God and told him what had happened. “Now tell me what is the value of life, God?

God said, “The answers you got from the Orange Seller, the Vegetable Seller, the Jeweler & the Precious Stone’s Seller explain the value of our life… You may be a precious stone, even priceless, but people may evaluate you based on their level of information, their belief in you, their motive behind entertaining you, their ambition, and their risk taking ability. But don’t fear, you will surely find someone who will discern your real value.”

Every single one of you is precious for ALLAH! Respect yourself! You are Unique! No one can Replace you!

[Remember its not written in Quran, its just an example]