QUALITIES WHEN CHOOSING A SPOUSE ACCORDING TO ISLAMIC PERSPECTIVE 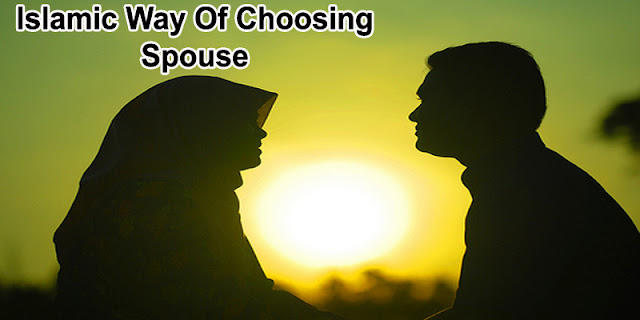 Islam emphasize on a importance of Marriage. In the past articles on marriage we read many things but today topic is different. This post is about selecting a good life partner with whom you can live your life happily according to rulings of Islam.

Normally People Selects their spouses due to several reasons such as Beauty, Wealth, Rank, Caste etc. I personally have seen most people choosing their life partner due to beauty. Now lets analyze in light of Qur’an and Hadith that whom should we Choose for marriage?

Qualities When Choosing A Spouse According to Islamic Perspective

According Prophet (Peace be upon him) said:

“A person chooses his life partner due to four reasons. 1. Rank 2. Money 3. Beauty 4. Taqwa (Virtue). One should choose who is best in Taqwa (Virtue)” [Sahih Hadith]

Following are the some of the most important characteristics that can be found in the Qur’an and the Sunnah when it come to choosing a good spouse.

“A woman is married for her deen, her wealth or her beauty. You must go for the one with deen, may your hands be in the dust! (if you fail to heed)” [Muslim]

This characteristic specifies ‘fulfilling the obligation and the avoidance of the forbidden’. Hadith indicates with reference to deen“, i.e, a prospective spouses piety and best practice of Islam.

The characteristic of piety applies to the man just as much as to the woman.The Prophet (Peace be upon him) said:

If someone with whose piety and character you are satisfied with comes to you, marry to him. If you do not do so, there will be trials in the earth and a great deal of evil.” [Tirmidhi]

Character is of extreme importance in Islam and goes hand in hand with faith and piety. The Prophet (Peace be upon him) has even described it as the purpose of his mission to mankind as we can see from the following hadith:

“I have only been sent to complete good character.” [Al-Hakim]

“Marry the loving/friendly, the child-bearing for I shall outstrip the other nations with your numbers on Qiyama.” [Ahmad, Abu Daud ]

The prospective spouses must ask and find out about the other person’s behavior and manners. As a sign also, one may look at the other person’s family’s manners and behavior and many times (but no always) the behavior of people of the same family are similar. In other words, some characteristics tend to run in some families whether they be good or bad characters such as anger, politeness, stinginess, generosity, lying, truthfulness and so forth.

BEAUTY AND LOOKS OF SPOUSE

Once a companion told Prophet (Peace be upon him) that he was going to get married. The Prophet asked if he had seen her. When the man said no, he said:

“Go and look at her for it is more likely to engender love between the two of you.” [Ahmad]

Umar ibn Al-Khattab once said: “Do not force your young girls to marry an ugly man, for they also love what you love.”

Beauty has its role, but remember that it is way down on the priority list under piety, character and deen. When a person puts beauty above all else, the results can be disastrous. This is one of the big reasons that young people seeking to get married must be helped by more mature family members in making their choice.

While not a requirement, Islam urges a Muslim man to marry a virgin only because men naturally prefer a woman who has never been with anyone else before.

“Marry virgins for they have sweeter mouths, more productive wombs and are more pleased with less.” [At-Tabaraani]

This attribute applies to the husband just as it applies to the wife. Umar ibn Al-Khattab once heard about a woman who was married to an elderly man and he said:

Final words, it is wise to Keep your eyes open and take your time. Since marriage is for life, for eternity, hurrying into it for any reason whatsoever is the act of a foolish or careless person who has only himself or herself to blame if things go wrong.

May Allah SWT help everyone in Finding Good Spouses