IS IT PERMISSIBLE TO SEEK FAME AND LOVE TO BE PROMINENT IN WORLDLY MATTERS? 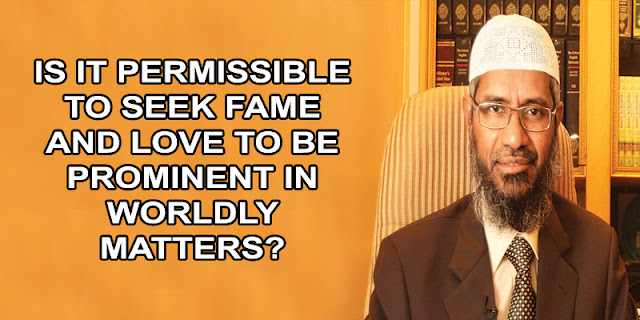 Seeking fame is blameworthy in all circumstances. The believer should be modest and humble, and he should not like to be pointed out. One of the main factors that corrupt a person’s efforts to reach his Lord is his love of fame and prominence among people, and love of leadership over them.

At-Tirmidhi (2376) narrated – and classed it as saheeh – that Ka‘b ibn Maalik said: The Messenger of Allah (blessings and peace of Allah be upon him) said: “Two hungry wolves sent against a flock of sheep cannot cause more damage to them than a man’s eagerness for wealth and prominence causes to his religious commitment.” Also classed as saheeh by al-Albaani in Saheeh al-Jaami‘ (5620)

The Prophet (blessings and peace of Allah be upon him) explained that the damage that eagerness for wealth and prominence causes to one’s religious commitment is no less than the damage that two hungry wolves would cause in a sheep pen, and this is quite obvious. If there is sound religious commitment, there cannot be this eagerness, because once the heart tastes the sweetness of servitude to Allah and love of Him, then there will be nothing dearer to the individual than that, and he will give it precedence over other things. In that way, Allah diverts evil deeds and shameful acts from those who are sincere to Allah alone.

This love of prominence and fame is one of the hidden diseases of the heart that may cause great spiritual harm, but people hardly pay attention to it until after it has gone so far that it is too difficult to fix the problem and rectify the damage it has caused.

It is often the case that people may harbour in their hearts subtle desires that could hinder attainment of love of Allah, servitude to Him and sincere devotion to Him, as Shaddaad ibn Aws said: O Arabs, the worst thing I fear for you is showing off and subtle desires. It was said to Abu Dawood as-Sijistani: What are subtle desires? He said: Love of leadership.

One of the worst outcomes of love of fame and prominence, and striving for it, is for a person to seek the praise of people, whether it is deserved or not.

Ahmad (16460) narrated that Mu‘aawiyah (may Allah be pleased with him) said: I heard the Messenger of Allah (blessings and peace of Allah be upon him) say: “Beware of praising one another, for it is like slaughter (i.e., fatal).” Classed as saheeh by al-Albaani in Saheeh al-Jaami‘ (2674)

Al-Mannaawi (may Allah have mercy on him) said:

Praise leads to self-admiration and arrogance, and it is fatal like slaughter, hence it is likened to it. Al-Ghazaali (may Allah have mercy on him) said: If someone does you a favour, if he is one of those who like to be thanked and praised, then do not praise him, because part of fulfilling his rights is that you should not approve of his wrongdoing, and his seeking thanks is wrongdoing. Otherwise, you may show him gratitude so that he will continue doing good.

Hence Ibraaheem ibn Adham said: One who loves to be known is not being sincere to Allah.

Ibraaheem an-Nakha‘i and al-Hasan al-Basri said: It is sufficient trial for a man to be pointed out with regard to religious or worldly matters, except the one whom Allah protects.

Once we understand this, there can be no doubt that it is safer for a man to prefer anonymity and be humble towards his Lord, and to refrain from seeking fame and prominence, even with regard to permissible worldly matters.

Muslim (2965) narrated that ‘Aamir ibn Sa‘d said: Sa‘d ibn Abi Waqqaas was with his camels when his son ‘Umar came to him and when Sa‘d saw him he said: I seek refuge with Allah from the evil of this rider. Then he dismounted and said to him: You are busy with your camels and sheep and you have left the people contending with one another for kingship? Sa‘d struck him on the chest and said: Be quiet! I heard the Messenger of Allah (blessings and peace of Allah be upon him) say: “Allah loves the slave who is pious, independent of means and hidden from the people.”

An-Nawawi (may Allah have mercy on him) said:

“hidden from the people” refers to one who is anonymous and is focused on worship and taking care of his own affairs. End quote.

Ibn al-Jawzi (may Allah have mercy on him) said:

Al-Fudayl ibn ‘Iyaad (may Allah have mercy on him) said:

If it so happens that a person seeks to do good deeds, whether they have to do with religious or worldly matters, then he becomes known as a result of that, without him seeking it and without him striving for that, then there is no blame on him for that. Rather what he has to do is to correct his intention when doing that good deed, and he should not worry about any fame that he attains after that, if it was not his aim to seek it and he was not longing for it. Undoubtedly leading figures in both religious and worldly matters will inevitably attain some level of fame, commensurate with their situation and what they achieve, and the extent to which people need them. It is not wise, and it is not prescribed in Islam at all, to stop doing righteous deeds and striving to spread good among people, whether those deeds are obligatory or mustahabb, for fear of becoming known or because the one who engages in such endeavours will inevitably become famous among people.

If the choice is between making oneself stand out and become prominent and keeping a low profile, then in that case he should choose to keep a low profile. But if he has no choice but to make himself known, then he must do so, by spreading his knowledge among the people, setting up lessons and study circles everywhere, and giving khutbahs on Fridays, on Eid and on other occasions, for that is something that Allah, may He be glorified and exalted, loves.

If it so happens that someone attains some degree of fame, either by doing something that is not Islamically acceptable, such as singing or acting, or by doing something that is basically permissible, but his intention became somewhat corrupted and he became motivated by fame, prominence and leadership, then what he must do is give up what he is doing of haraam things – such as performing indecent songs and music, or acting, and the like – then whatever fame he has attained as a result of that, he should try to use it for good. If he thinks that people look up to him and take him as an example, then let him be a good example, and spread truth, the Sunnah, beneficial knowledge and righteous deeds.

But he must strive to watch his emotions and correct his intentions, and let his doing that be sincerely for the sake of his Lord. The fact that people look up to him is something that has been decreed for him without him seeking it or striving for it, or paying any attention to it, or loving that people think highly of him, or paying attention to what they say about him. Rather he should strive to make all of that for the sake of his Lord; he should fix his intention and not be heedless. Sufyaan ath-Thawri (may Allah have mercy on him) said: I never dealt with anything more difficult to deal with than my intention; it keeps changing on me.