I AM BROKE – DOES THAT MEAN ALLAH HATES ME? 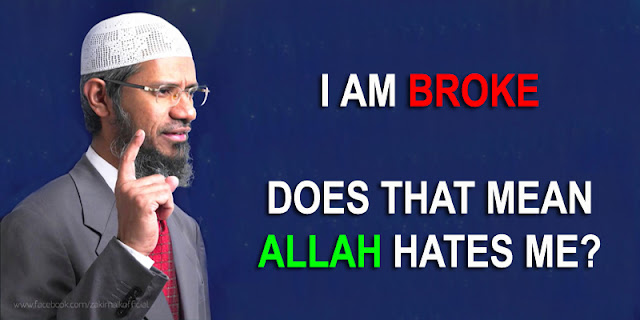 Does Allah give wealth to those that He loves?

We’ve all heard it before.

“You can be rich, you can be successful, you can be brilliant. You can become a millionaire and work your way up the corporate ladder. All you have to do is put your mind to it.”

The fact of the matter is this is completely not true. Not everyone can be as rich and successful as they would like to be by simply putting their mind to it and following some get-rich-quick scheme. It just won’t happen.

And in case you’re wondering why, the answer is very simple. Because Allah says so:

“Look how We have favored [in provision] some of them over others. But the Hereafter is greater in degrees [of difference] and greater in distinction.”

The fact of the matter is, Allah has favoured certain people in this life over others. And by default, this means that certain people will be wealthier than others, irrespective of their efforts, their skills or even their contacts.

Just take one look at the world around you. How many of those with high skill sets are in low paying jobs, while those with low skill sets are making millions? In fact, we could have two people who both had the same upbringing, studied the same degree, and put in the same amount of effort – yet one will always be more wealthier than the other. It’s the way Allah created life.

And by no means does this mean Allah is not being fair in his distribution of wealth, it simply means Allah is testing people differently. While some are tested with having a lower income, others are tested in their richness.

Many unfortunately will however jump to the conclusion that if someone has more money in this worldly life, it is an indication that Allah loves them more and has hence favoured them.

This measure of thinking couldn’t be further from the truth, and Allah criticises such people in the Quran.

As for man, when his Lord tests him by exalting him and bestowing His bounties upon him, he says: “My Lord has exalted me.”

But when He tests him by restricting his sustenance, he says: “My Lord has humiliated me.”

The reality is both situations Allah places in are tests, and only Allah knows what is best for us. As Umar Ibn Khattab would say “I don’t know whether to ask Allah for poverty or richness, for I do not know which one is better for me”.

And of course this does not mean one should give up on seeking a livelihood or to quit making any effort. But what I am saying, is for us not to think that just because we didn’t make it successful in this life, that it’s somehow our fault or we’ve done anything wrong. Rather, we should do what we can to attain a living by placing our trust in Allah, and be content with whatever Allah has given us in return.

After all, He is the Provider and He has already guaranteed and allocated for each and every one of us our portion of wealth that we will acquire over our lifespan, and there is nothing we can do to alter His decree.

May Allah grant us all the understanding to be content with whatever amount of wealth we are blessed with; and allow us to use such wealth in a manner that pleases Him.