GAMES BETWEEN WHAT IS LAWFUL AND WHAT IS PROHIBITED 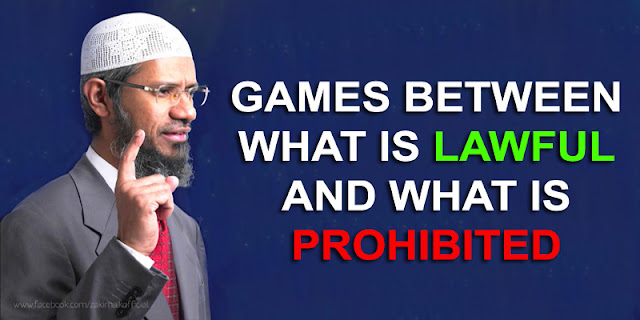 The first category is games which help in jihaad for the sake of Allaah, whether that is physical jihaad (fighting) or verbal jihaad (i.e., knowledge), such as swimming, shooting, horse-riding, and games which involve developing one’s abilities and Islamic knowledge, etc. These games are mustahabb and the one who engages in them will be rewarded so long as his intention is good and he seeks to support the religion thereby. The Prophet (peace and blessings of Allaah be upon him) said: “Shoot, O Bani Adnaan, for your father was an archer.” Shooting or archery includes by analogy all similar actions.

The second category is games which do not help in jihaad. These are of two types.

The first type is games which are specifically forbidden in the texts, such as playing with dice. These games should be avoided by the Muslim.

The second type is games which are neither enjoined nor forbidden in the texts. These are of two kinds:

The first kind is games which include something that is haraam, such as games that involve statues or images of living beings, or which are accompanied by music, or games which lead to arguments and conflicts among people and result in their saying or doing something bad. These come under the prohibition because of the haraam consequences to which they lead or because they are a means to something that is haraam. If something is the means that usually leads to something that is haraam, then we should refrain from it.
The second type is games which do not involve anything haraam, and which usually do not lead to it, like most of the games we see of football (soccer), volleyball and table-tennis etc. These are permissible, subject to the following restrictions:

1 – They should be free of gambling, i.e., betting between the players.

2 – They should not form an obstacle to the obligatory remembrance of Allaah, or to prayer, or to any obligatory act of worship, such as honouring one’s parents.

3 – They should not take up a lot of the player’s time, let alone taking up all of his time or causing him to be known among the people for that, or becoming his job, because then there is the fear that the aayah (interpretation of the meaning) “Who took their religion as an amusement and play, and the life of the world deceived them. So this Day We shall forget them” [al-A’raaf 7:51] may become applicable to him.

The last condition does not have a set limit, but should be referred to what is customary among the Muslims; whatever they regard as excessive is not allowed. A person should set a limit for the time spent playing and for the time spent in serious pursuits; if (the time devoted to playing) is half or one-third or one-quarter, then this is too much.