BLESSINGS AND REMEDIES FROM QURAN CHAPTERS 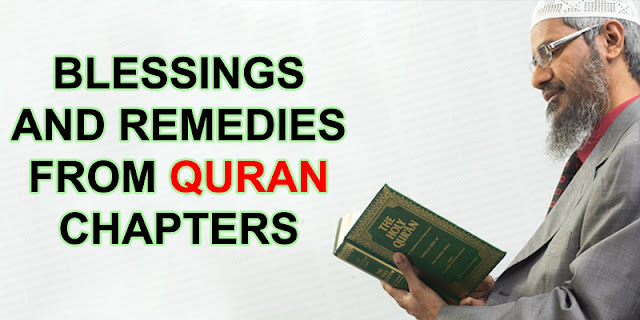 Qur’an is the book of guidance for a Muslims life. This article is a collection of Quranic verses, Ahadeeth (Prophet’s Saying) and sayings of the salaf (pious people that followed the prophet) on the majesty of Qur’an, the great virtues for reading and following it.

THE BLESSINGS OF SURAT AL-FATIHAH

Surat Al-Fatihah is a cure from every illness. (Darmi, Bahiqi)

The Messenger of Allah said (Reported by Bukhari):

“Shall I not teach you the greatest Surah in the Quran before you leave the Masjid?” So he took me by my hand until we were about to leave the Masjid, (when) I said: ‘O Messenger of Allah, you said that you would teach me the greatest Surah in the Quran.’ He said: “Al-Hamdu Lillahi Rabbil Alamin (i.e. Surat Al-Fatihah); it is the Seven Repeatedly Recited Verses, and the Grand Quran which has been given to me.”

THE BLESSINGS OF SURAT AL-BAQARAH

Do not make your home a graveyard, the Shaitan runs from the home in which Surah Baqarah is recited. ( Muslim)

Read Surat Al-Baqarah, for verily grasping it is a blessing, abandoning it is a deterrent, and magicians cannot hear it. (Muslim)

Read the last two verses from Surat Al Baqarah, in a night, (then that will be) sufficient. (Bukhari and Muslim):

THE BLESSINGS OF AYAT AL-KURSI

Whoever read Ayatul Kursi after every Fard Salah, he will be under the protection and security of Allah. (Dailmi on the Authority of Sayeduna Ali)

The Messenger of Allah said (Reported by Muslim):

THE BLESSINGS OF SURAT AL-KAHF

Recite Surah al-Kahf every Jumu’ah Day or Night: “Whoever reads Soorat al-Kahf on the night of Jumu’ah, will have a light that will stretch between him and the Ancient House (the Ka’bah).” (al-Daarimi. Saheeh by Shaykh al-Albaani in Saheeh al-Jaami, 6471)

THE BLESSINGS OF SURAT YASEEN

Read Surat Yaseen, Allah will write the reward of reading the Quran ten times for you (Tirmizi and Darmi)

Read Surah Yaseen for the pleasure of Allah, the past sins will be forgiven so read this near your deceased. (Bahiqi)

THE BLESSINGS OF SURAT TABARAK/SURAT AL-MULK

Recite Surat Al-Mulk every night Allah will protect from the torment of the grave. (al-Nasaa’i; Hasan by al-Albaani in Saheeh al-Targheeb wa’l-Tarheeb, 1475)

“Verily a Surah in the Quran, (which contains) thirty verses, intercedes for its possessor until he is forgiven, and it (i.e. the Surah) is,`Exalted be He in Whose Hand is the dominion (Surah Tabarak).” (Abu Dawud, At-Tirmidhi, and others)

THE BLESSINGS OF SURAT AL-KAFIROON

Read Surat Al Kafiroon its reward is equal to one fourth of the Quran. (At-Tabarani from Abdullah ibn Umar AIKhattab)

Read on your bed (i.e. before sleeping), it is an immunity from Shirk (Association). (AlBayhaqi in ‘Shu’ab Al-Iman’ from Anas ibn Malik)

THE BLESSINGS OF SURAT AL-IKHLAS

Read Surat Al-Ikhlas its reward is equal to one third of the Quran. (Bukhari)

THE BLESSINGS OF SURAT AL-IKHLAAS, SURAT AL-FALAQ AND SURAT AN-NAAS

Whenever the Prophet (peace be upon him) retired to bed every night, he used to cup his hands together and blow over it after reciting Surat Al-Ikhlaas, Surat Al-Falaq and Surat An-Naas, and then rub his hands over whatever parts of his body he was able to rub, starting with his head, face and front of his body. He used to do that three times. (Bukhari)