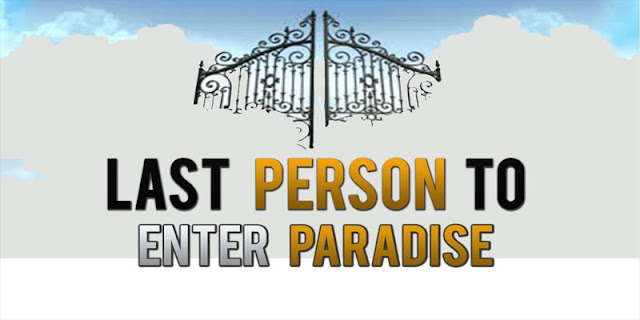 Entering Jannah is the ultimate goal of any Muslim. Nothing comes close it. Our Iman is boosted many folds when we read such Hadith that tells us about the bounties the dwellers of Jannah will enjoy. One such beautiful hadith that shows the mercy of our exalted lord and our imperfection is mentioned below. It is among my favorite hadith for it increases your love for Allah many folds and you cannot resist talking to him and asking him for Jannah too. So here goes:

… And there will remain one man who will be facing the (Hell) Fire and will say,

Man : ‘O Lord! It’s (Hell’s) vapor has Poisoned and smoked me and its flame has burnt me; please turn my face away from the Fire.’

...He will keep on invoking Allah till...

Allah says ‘Perhaps, if I give you what you want), you will ask for another thing?’

The man will say, ‘No, by Your Power, I will not ask You for anything else.’

...Then Allah will turn his face away from the Fire...

The man will say, ‘O Lord, bring me near the gate of Paradise.’

Allah will say ‘Didn’t you promise not to ask for anything else? Woe to you, O son of Adam ! How treacherous you are!’

...The man will keep on invoking Allah till...

Allah will say, ‘But if I give you that, you may ask me for something else.’

The man will say, ‘No, by Your Power. I will not ask for anything else.’

He will give Allah his covenant and promise not to ask for anything else after that. So Allah will bring him near to the gate of Paradise, and when he sees what is in it, he will remain silent as long as Allah will, and then

He will say, ‘O Lord! Let me enter Paradise.’

Allah will say, ‘Didn’t you promise that you would not ask Me for anything other than that? Woe to you, O son of Adam ! How treacherous you are!’ On that,

the man will say, ‘O Lord! Do not make me the most wretched of Your creation,’

He will be addressed, ‘Wish from so-and-so.’

...He will wish till all his wishes will be fulfilled...

then Allah will say, All this (i.e. what you have wished for) and as much again therewith are for you.’

Abu Huraira added: That man will be the last of the people of Paradise to enter (Paradise). … I heard Allah’s Apostle saying, ‘This is for you and ten times as much.’

So even the last man who will enter jannah will be blessed with all his wishes Allah’s smile and 10 times more then what he wished for. SubhanAllah! still we think with our hard work we can make this world a paradise, when this world is just a gateway to it. So do good and ask Allah for his mercy, pleasure and Jannah.