ALLAH IS MERCIFUL - WHY PUNISHMENT? 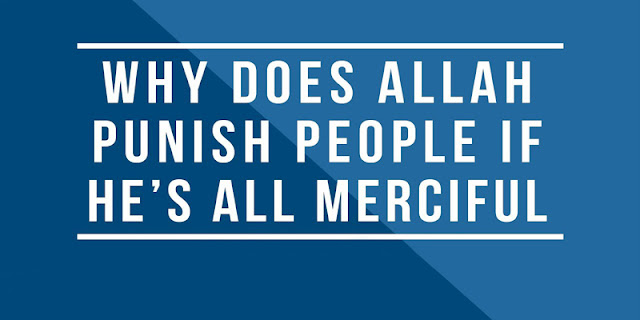 1- Allah created human beings and He gave them everything for their existence.

2- Allah guided people through His Prophets and Messengers and gave them all the possibilities to be good and faithful.

3- If people still reject Allah and turn away from Him, then He does not care for them.

4- Such people have made themselves unworthy of His love and compassion.

Allah (Mighty and Exalted Be He) is indeed very Merciful, Loving and Compassionate, but He is also Just and Severe in punishment. According to the Qur’an, Allah is “Forgiver of sins, Accepter of repentance, the Stern in punishment, the Powerful…” (Ghafir 40:3)

Islam teaches us a balanced life and so it teaches us both aspects of Allah’s Being.

Allah created human beings and He gave them everything for their existence. He guided them through His Prophets and Messengers and gave them all the possibilities to be good and faithful, but if they still reject Him and turn away from Him, then He does not care for them.

Such people by their own actions have made themselves unworthy of His love and compassion.

He warned them again and again that the consequences of their sins and rebellion will be severe, but if they did not pay any attention to Him, so why should He show any mercy to such ungrateful, stubborn, and evil creatures?

Allah says in the Qur’an:

“O human being, what has deceived you about your Lord Most Beneficent? Him Who created you, fashioned you in due proportion, and made you right; and in whatever form He willed for you, He set you. But no, you do deny the Day of Judgment! Indeed over you are keeping watch the honorable beings; writing down (your deeds). They know what you do. The Righteous will be in Bliss; and the Wicked will be in the Fire, which they will enter on the Day of Judgment.” (Al-Infitar 82:6-15) And Allah says, “We wronged them not, but they it was who did the wrong.” (Az-Zukhruf 43:76)