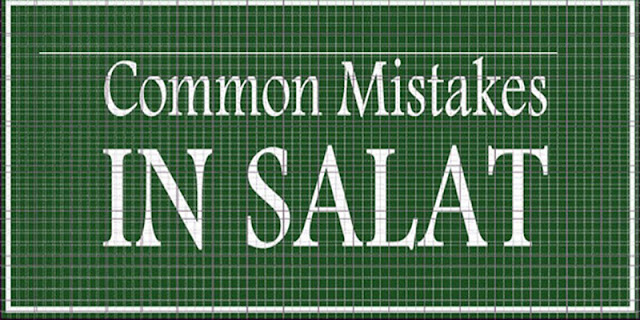 Salat (Salah, Namaz) or Prayer is the most important pillar of Islam which will be questioned on the day of Resurrection. Performing Prayers is obligatory for every adult Muslim. Salah is a ritual prayer having prescribed conditions and one must perform Salaah while fulfilling those conditions. Many times we perform Prayers or Salah as a practice or a part of habit only but tend to forget the basic essence of Namaz and make many mistakes during Prayers. 10 common mistakes and errors in Prayers or Salah are discussed:

1. DELAYING THE SALAH INTENTIONALLY: While being busy in worldly affairs we often delay the Salah from its preferred time. This is the most common mistake in Prayer made by most of us. We think that Praying is last thing to do and we must attend to other matters first. Many workers delay Zuhr and Asr Prayer till night-time. Quran speaks strictly on guarding our Salat:

Here to safeguard the Salat means to perform it at its prescribed time and to be steadfast upon it.

Narrated Ibn Umar (R.A): Allah’s Messenger (P.B.U.H) said: “Whoever misses the Asr prayers (intentionally), then it is as if he lost his family and property.” [Al-Bukhari]

Another Hadith explains the importance of praying on time:

Narrated Abu Al-Malih (R.A): “We were with Buraidah in a battle on a cloudy day and he said, “Offer the Asr prayer early as the Prophet (P.B.U.H) said, “Whoever omits the Asr prayer, all his (good) deeds will be lost.” [Al-Bukhari]

2. RECITING HOLY QURAN FAST IN THE PRAYERS: we must pause and take breaks while reciting Holy Quran during Salat. We should not recite the Surah’s so fast that that the verse get intermingled. One of the Hadith emphasizes this issue:

“The Prophet (P.B.U.H) used to pause after each verse of Surah al-Fatiha. [Abu Dawood]

3. MOVING BEFORE THE IMAM IN CONGREGATIONAL PRAYERS: one should not race with the imam i.e. try to move before the Imam or with the Imam because the correct ruling is when Imam says Allahu Akbar, then the person who’s following the Imam in Prayers should say Allahu Akbar. Not before Imam or with Imam. Like this Hadith of the Prophet (P.B.U.H) states:

“Surely the imam is there to be followed” [Muslim]

The Prophet (P.B.U.H) said: “Does not the one who raises his head before the Imam does fear that Allah would transform his head into a donkey’s head” [Muslim]

4. PERFORMING THE SALAH HASTILY: Salat should be performed slowly and calmly. Rukoo or Sujood must be performed unhurriedly. In order to complete the Rukoo one must stay in Rukoo posture long enough to recite “Subhan Rabbi yal Adtheem” at least three times. In the same manner, for the Sujood the person should say “Subhan-na Rabbi yal-ala” three times slowly. This Hadith commands to complete the Rukoo and Sujood in proper manner:

The Prophet (P.B.U.H) said: “He who does not complete his rukoo and sujood, his prayer is void” [Abu Dawood]

5. GAZING RIGHT, LEFT OR UPWARD DURING SALAT: While performing Salah, one should concentrate on looking to the point where the head is placed during Sujood rather than looking upwards. Because this may lose concentration. In the Hadith recorded by Sahih Muslim the Prophet (P.B.U.H) said:

“Let those who raise their gaze up during prayer stop doing so, or else their sights would not return to them” (i.e. they will lose their eyesight) [Muslim]

6. PERFORMING SUJOOD IMPROPERLY: most common mistake observed in Prayers is to perform Sujood by resting only the tip of head on floor.

The Prophet (P.B.U.H) said: “I am commanded to prostrate on seven bones the forehead and the nose, the two hands [palms], the two knees, and the two feet” [Muslim]

7. NOT PERFORMING PRAYERS DURING ILLNESS OR WHILE TRAVELING: The Prophet (P.B.U.H) always used to perform Prayers even during His last days before death. He (P.B.U.H) never neglected it even during combats. Prayer is obligatory and must be performed in any condition. If a person cannot perform ablution due to his illness then he may perform tayammum (dry ablution). If he cannot stand in prayer, he may perform Salah while sitting or even laying down. Same is the case while traveling. The person can combine 2 Salah while traveling i.e. Zuhr Prayer and Asr Prayer. or Maghrib Prayer and Isha Prayer.

8. CROSSING IN FRONT OF A PERSON WHO IS PERFORMING SALAH: The Prophet (P.B.U.H) said: “Were the one who crosses in front of a praying person to know the consequences of doing so, he would have waited for forty better than to cross in front of him” [Bukhari]

9. GOING TO MOSQUE FOR PERFORMING SALAH WITH RAPID WALK: when the time of Prayer has approached and some person has fear that he might miss his Salah; for the fear of that most of us try to walk quickly or run for the fear of missing some part of the prayer. This is not allowed according to Hadith:

The Messenger of Allah (P.B.U.H) said: “When prayer has already started, do not walk quickly to join in. Proceed calmly and reposefully; then join in whichever part you catch up, and complete whichever part you missed” [Bukhari and Muslim]

10. EATING FOOD OF BAD SMELL BEFORE PERFORMING PRAYERS: consuming foods that have bad smell like the garlic or onion etc. should not be taken before the Salah because the bad smell may irritate the angels and the praying people.

The Prophet (P.B.U.H) said: “He who eats from the smelly plant [garlic or onion], let him come not near our mosque; the angels are bothered by that which bothers men” [Muslim]

May Allah guide us to perform our Salah perfectly and help us to guard our Salat so when on the Day of Judgment we are questioned about our prayers, we may succeed. Ameen.