WHAT IS THE FATE OF ANIMALS, JINN AND ANGELS IN THE HEREAFTER? 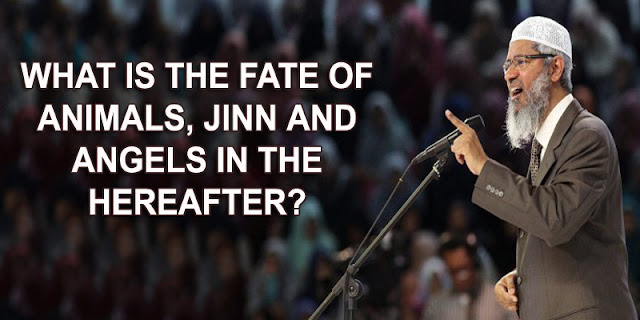 1- We should not be much concerned about the status and fate of such creatures.

2- Absolute justice will prevail in the Hereafter to the extent that it will include some sort of oppression or aggression taking place among animals.

3- The Jinn will be held responsible for their deeds just like men.

4- The Angels will not be called to account and will not be rewarded or punished as a result.

We should not be much concerned about the status and fate of such creatures. What one should busy himself with is “what will be my fate in the afterlife” and this will be determined according to what man does of good or bad deeds.

However, in some reports it is stated that the hornless ram will retaliate for the harm caused to her by the horned one.

This indicates absolute justice will prevail in the Hereafter to the extent that it will include some sort of oppression or aggression taking place among animals. More knowledge than this is not of any benefit for us.

As for the Jinn, they are held responsible for their deeds just like men and hence will be called for account on the Day of Judgment and will be either punished or rewarded according to their deeds.

“And among us there are righteous folk and among us there are far from that. We are sects having different rules. And we know that we cannot escape from Allah in the earth, nor can we escape by flight. And when we heard the guidance, we believed therein, and whoso believes in his Lord, he fears neither loss nor oppression. And there are among us some who have surrendered (to Allah) and there are among us some who are unjust. And whoso hath surrendered to Allah, such have taken the right path purposefully. And as for those who are unjust, they are firewood for hell.” (Al-Jinn 72:11-15)

The status of angels on that Day will be as mentioned in the Qur’an in several places.

“Then, on that day will the Event befall. And the heaven will split asunder, for that day it will be frail. And the angels will be on the sides thereof, and eight will uphold the Throne of their Lord that day, above them.” (Al-Haqqah 69: 15-17)

However, it is to be stated that they will not be called to account and will not be rewarded or punished as a result.

This is because they are all-time Allah’s devotees; they never disobey Him. Allah says: “O you who believe! Ward off from yourselves and your families a Fire whereof the fuel is men and stones, over which are set angels strong, severe, who resist not Allah in that which He commands them, but do that which they are commanded.” (At-Tahrim 66:6)

As for the final point in your question, Almighty Allah says: “We mete out death among you, and We are not to be outrun, That We may transfigure you and make you what you know not.” (Al-Waqi`ah 56:60-61)

It is reported that no elderly will enter Paradise in the sense that all people will be in the age of youth. The bodies and form will be of another nature that will be prepared either for punishment or for reward. But a detailed information about the ‘HOW PROCESS’ is known only to Allah alone.