AN AWESOME WAY TO TEACH KIDS ISLAM AT A YOUNG AGE 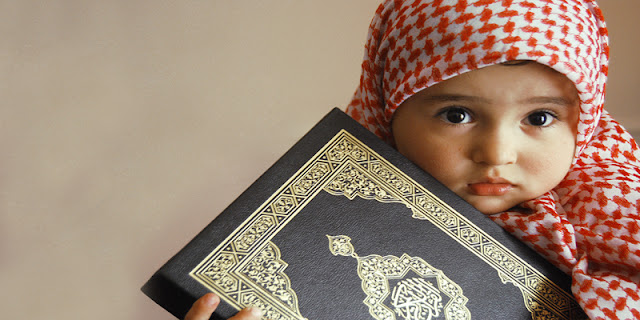 It may be difficult to introduce the concept of islam to children. We advice you to keep trying.

Ibn al-Qayyim (may Allah have mercy on him) said:

Whoever neglects to teach his son that which will benefit him, and ignores him, has done something very bad indeed. Most children go astray because of their parents who neglect them and fail to teach them the duties and Sunnahs of their religion. They neglect them when they are young so they do not benefit themselves or benefit their parents when they grow up. End quote.  End quote from Tuhfat al-Ahwadhi, p. 229

What we advise you all to do with regard to introducing Islam to your children making it appealing to them include the following:

1.     Create a connection between them and the Arabic language, and instil a love for it in their hearts, because it is an important key to understanding and loving Islam.

2.     Help them get to know friends of their own age and background who are practising Muslims. It is essential that these friends should be of good character and righteous, so that they can influence your children and be an example for them in their righteousness and adherence to Islam, and the manner in which they interact with their parents.

The Messenger of Allah (blessings and peace of Allah be upon him) said: “The likeness of a good companion and a bad companion is that of one who carries musk and one who works the bellows. With the carrier of musk, either he will give you some or you will buy some from him, or you will notice a good smell from him; as for the one who works the bellows, either he will burn your clothes or you will notice a bad smell from him.”

3.     Make them feel an attachment to the mosque, by encouraging them to pray and attend classes; you can also make that attractive to them and encourage them by giving them gifts and prizes every time one of them shows some progress in his or her classes.

It is also a good idea for you to go with them to the mosque, to encourage them to go there and pray.

If it is not easy for them to go to the mosque because it is far away or the route is not safe, then do not neglect to teach them to pray on time at home. There is a binding instruction (from the Prophet (blessings and peace of Allah be upon him)) to teach those who reach the age of seven to pray and to make them do it; before this age they may be taught but not by way of making them do it.

The Messenger of Allah (blessings and peace of Allah be upon him) said: “Instruct your children to pray when they are seven years old and smack them if they do not do it when they are ten, and separate them in their beds.”

4.     Let them hear Qur’an recited in beautiful voices, so that the Qur’an will be held in high esteem in their hearts. The Book of Allah is a Book of guidance and light for people, which will illuminate the way for them and make them steadfast in adhering to the straight path, by Allah’s leave.

5.     Watch Islamic cartoons and movies so that they can compare what they see and hear in them with what they see and hear in other movies. Here you have an important role to play in explaining the differences between the two, and highlight how Islam encourages people to do good, uphold ties of kinship, show kindness and be merciful, and it forbids evil, severing ties of kinship, corruption and hardheartedness.

6.     Show them Islamic websites that will be beneficial for them, each according to his age and whilst being careful not to let them roam freely on the internet; rather that should be through you.

7.     Something that you should think about seriously and that will help you in what you are seeking to achieve is taking them to do ‘Umrah and visit the sacred House of Allah, for these visits have a far-reaching impact on the hearts of young people as is also the case with adults.

8.     Teach them the basic principles of belief in a simple and straightforward manner according to their ages, such as the Oneness of Allah, may He be exalted, and that He can hear them and see them, and that He rewards for good deeds and adhering to the rulings of Islam

The fact that ‘Abdullah ibn ‘Abbaas was very young did not prevent the Prophet (blessings and peace of Allah be upon him) from saying to him eloquent words about Tawheed and ‘aqeedah (belief). It was narrated that Ibn ‘Abbaas said: I was behind the Messenger of Allah (blessings and peace of Allah be upon him) one day and he said: “O young man, I shall teach you some words (of advice): be mindful of Allah, and Allah will protect you. Be mindful of Allah, and you will find Him in front of you. If you ask, ask of Allah; if you seek help, seek help of Allah. Know that if the nation were to gather together to benefit you with anything, it would benefit you only with something that Allah had already decreed for you, and that if they were to gather together to harm you with anything, they would only harm you with something Allah had already decreed for you. The pens have been lifted and the pages have dried.”

Narrated by at-Tirmidhi, 2516; classed as saheeh by al-Albaani inSaheeh at-Tirmidhi.

9.     Present stories appropriate to their ages from the biography of the Prophet Muhammad (blessings and peace of Allah be upon him) and his noble Companions (may Allah be pleased with them), so that they will know that they belong to the best religion, the best Prophet, the best nation.

10. Put them in Islamic schools and keep them away from corrupt schools, so that the Islamic schools can take care of their beliefs and conduct; choose the best of them according to what you see fit.

You should not be careless about two important matters:

Pray that Allah help them and guide them; your supplication will be an important means of their being guided, so do not neglect it and do not think little of it.

You should be a good example for them in treating them kindly and showing compassion towards them. That is not only part of motherhood; it is also part of being a Muslim who adheres to the religion of Allah, may He be exalted.

We ask Allah to help you to do that which is good and to guide your children to that which He loves and which pleases Him.