DOES THE QURAN MENTION THE BLISS OF BELIEVING WOMEN IN PARADISE? 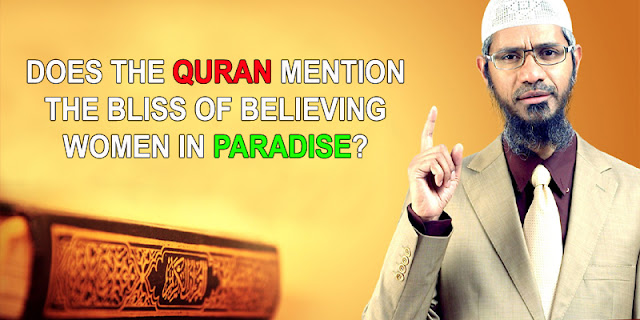 1- Muslims believe that Allah is perfect justice, fairness and wisdom.

2- There are many Quranic verses that speak about the bliss of the believing women in Paradise.

3- Women will have of bliss in Paradise whatever their hearts desire and will delight their eyes.

Allah (may He be exalted), says, mentioning the bliss of the believing women in Paradise:

“Allah has promised the believing men and believing women gardens beneath which rivers flow, wherein they abide eternally, and pleasant dwellings in gardens of perpetual residence; but approval from Allah is greater. It is that which is the great attainment.” (At-Tawbah 9:72)

“[And] that He may admit the believing men and the believing women to gardens beneath which rivers flow to abide therein eternally and remove from them their misdeeds – and ever is that, in the sight of Allah, a great attainment.” (Al-Fath 48:5)

“On the Day you see the believing men and believing women, their light proceeding before them and on their right, [it will be said], ‘Your good tidings today are [of] gardens beneath which rivers flow, wherein you will abide eternally.’ That is what is the great attainment.” (Al-Hadeed 57:12)

“And their Lord responded to them, ‘Never will I allow to be lost the work of [any] worker among you, whether male or female; you are of one another. So those who emigrated or were evicted from their homes or were harmed in My cause or fought or were killed – I will surely remove from them their misdeeds, and I will surely admit them to gardens beneath which rivers flow as reward from Allah, and Allah has with Him the best reward.’” (Aal `Imraan 3:195)

Moreover, in Paradise, the believing woman will have whatever her heart desires and will delight her eyes, such as has never even crossed her mind in this world, as Allah, may He be exalted, says:

“And no soul knows what has been hidden for them of comfort for eyes as reward for what they used to do.” (As-Sajdah 32:17)

“Circulated among them will be plates and vessels of gold. And therein is whatever the souls desire and [what] delights the eyes, and you will abide therein eternally.” (Az-Zukhruf 43:71)

It is not appropriate or befitting to the modesty and dignity of women, to speak of what there will be for them in Paradise, in a manner similar to what a man will have of al-hoor al-`een.

Undoubtedly the Arab character and modesty respects women too much to mention what they will have in that regard. It is sufficient to note that she will have of bliss in Paradise whatever her heart desires and will delight her eyes.