A BALANCED DIET - PRESCRIBED IN THE QURAN 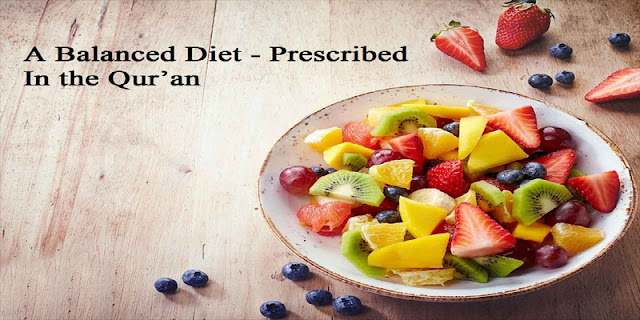 The Qur’an has not restricted itself in merely mentioning the permissible and impermissible foods but goes to the extent of giving useful tips regarding a balanced diet, a diet which contains most if not all the useful ingredients required for the growth, strengthening and repairing of the human body. These ingredients include animal protein, fat, calcium, iron, salts, etc. The most balanced diets consist of meat, fish, fresh milk, cheese and fruit. Both direct and indirect references have been made regarding the aforementioned.

The reference regarding the importance of meat protein in the human diet is given in the following verse:

“And the cattle, He has created them for you, in them there is warmth (clothing) and numerous benefits, and of them you eat.” (16:5)

In this verse special reference has been given to the importance of eating despite having said,

“…numerous benefits…”.Reference regarding other types of meat has also been given such as the meat of fowls in the following verse:

Fish has always been considered as a food of very high protein and is very important for human consumption. Allah says:

The usefulness of fresh milk is stressed in these words:

“And verily in the cattle there is a lesson for you. We give you to drink of that which is in their bellies, from between excretion and blood, pure milk, palatable to the drinkers.” (16:66)

The benefits of fruits as good nourishment can be understood from this verse:

“And from the fruits of date palms and grapes, you desire strong drink and a goodly provision.” (16:67)

Similarly there are verses which cover the whole range of fruits, salads, and vegetables which also play an important role in a nutritious, balanced diet:

“It is He who sends down rain from the sky, and with it We bring forth vegetation of all kinds, and out of it We bring forth thick clustered grain. And out of the date palm and its spate come clusters of dates hanging low and near, and gardens of grapes, olives and pomegranates each similar (in kind) yet different (in variety and taste). Look at their fruits when then begin to bear, and the ripeness thereof.”(6:99)

Islam, being a complete religion, also teaches and advises the believer as to what the best method of eating is. The believers are advised to be moderate in every aspect of life. Direct reference has been made in the Noble Qur’an regarding moderation in eating and drinking.

Moderation - The Teachings of the Prophet Muhammad (peace be upon him)

The Best of Teachers and the Mercy of the Worlds (peace be upon him) is reported to have clarified the meaning and limit of moderation in a tradition in which he is reported to have said that one’s worst weakness is one’s belly. If you must eat make sure you fill one third of your stomach with food, one third with water and leave one third for air i.e. leave it empty.

In another narration, the reason for moderation has been clearly stated. The Holy Prophet (peace be upon him) is reported to have said:

In short, believers are advised to always take care of their stomachs and refrain from foods and practices that might pollute the stomach with various diseases. In order to do so the Holy Prophet (peace be upon him) is reported to have advised believers to always stop eating before their stomachs are completely full i.e. stop eating when the urge to eat more is still present.

Conclusion - The Etiquette's of Eating and Drinking

Islam teaches us many other etiquette's of eating and drinking. The Holy Prophet (peace be upon him) made a point of developing remarkably clean and healthy eating habits among his followers. He asked the companions to wash their hands before and after, to start eating with the praise of Allah, to eat using the right hand, not to eat until they really felt hungry, not to eat and drink excessively. Finally, by praising and thanking Allah for the food and drink, for making it easy to swallow and for producing an exit for it.

From all that has been mentioned, the importance of healthy eating, a balanced diet and hygiene can be understood in the light of the Qur’an and Sunnah. Islam has stressed on the importance of these things right from the start unlike health authorities etc., which have just recently begun to stress its importance. This could be counted as just another gem that manifests the perfection of Islam.