5 STORIES ABOUT PATIENCE IN THE QURAN 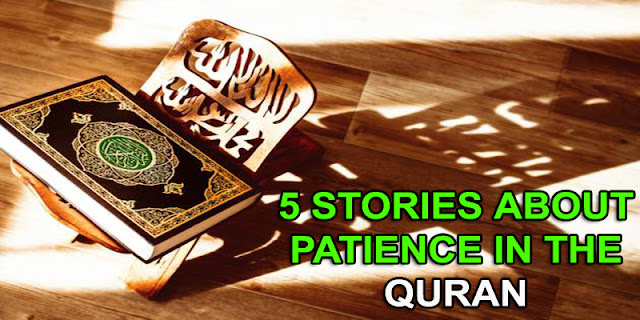 Patience and gratitude are two keys of happiness. The Prophet Muhammad (peace be upon him) said:

“If Allah intends for a servant to reach a rank he is unable to reach by his good deeds, then Allah will put him to trial in his body or his wealth or his children, and he will be patient until he reaches the rank intended for him.” (Ahmad)

Being a Muslim requires a lot of patience, especially in turbulent times like this. Patience is needed in staying away from things which are displeasing to Allah, and obeying Allah’s commands.

Every single day our patience is tested in some way or another — from prayer on time, fasting in hot summer days, doing hajj while being trampled by smelly people, to solving marital conflicts and enduring admonishments from parents.

Since having patience is something so important and necessary for each one of us, it’s not surprising that Allah has given us wonderful examples of patience in the Quran, patience displayed by the heroes of Islam throughout different ages and times. Who were these heroes? Let us get introduced to five of them.

When someone says sabr (patience), you often hear the word jameel (beautiful) added to it. This famous phrase was used by Yaqub. The story begins with the enmity between two groups of his own sons – one group containing Yusuf and Benyamin, another group the rest of his sons who were in fact much older than the other two. These older sons were extremely jealous of Yusuf, and so one day they took him and threw him in a well, and then came back to their father weeping and saying that a wolf ate him. Yaqub, who was very intelligent, guessed the real story.

Imagine your favorite son being harmed by your other sons, wouldn’t it make any sane person crazy in grief and rage? But what did Yaqub say? Sabrun Jameel (beautiful patience)! Imagine how much trust in Allah you need to do that. This is what he said:

{[Jacob] said, “Rather, your souls have enticed you to something, so patience is most fitting. And Allah is the one sought for help against that which you describe.} (12:18)

The most chaste and pious of all women, she was given a unique blessing by Allah – she gave birth to Jesus (peace be upon him) while still a virgin. Today the most modern medicines and facilities do not stop a woman from screaming and shouting in pain while giving birth. Imagine going to a secluded wilderness and having labor pains sitting under a tree. And then she came back, and guess what? The very example of piety, Maryam, is accused of adultery. It is not an easy thing to endure for such a woman. But her Lord had commanded her not to say anything, so she just pointed at her infant son. And then, the gift of her patience, Jesus replies to the people who were accusing her:

He was the savior of Banu Israel, the brave man who confronted the monster, the killer of thousands of babies, Firaun. He saved Banu Israel from his hands and took them to a safe place. And yet they disobeyed him and were extremely offensive multiple times.

Despite getting Divine food on their daily menu, they demanded garlic, onions and lentils!

He left them just for a few days, and they started worshihpping a calf.

They even demanded that they want to see Allah with their own eyes before they obey His commands.

Imagine having to deal with a whole nation like that on a daily basis. How much does a prophet has to endure before he utters the following words:

{…O my people, why do you harm me while you certainly know that I am the messenger of Allah to you?} (61:5)

Yet he endured all of it till the day of his death, and is counted among the five ulul azm min ar Rusul.

Talk of a husband being a tyrant. Asiya’s husband was none other than Pharaoh, that same killer of thousands of babies who had enslaved the Children of Israel. She lived with that man, endured his abuses, and was patient through it all only for the sake of Allah. She made the following dua:

5) IBRAHIM (PEACE BE UPON HIM)

He was kicked out of his house for believing in the Oneness of Allah. He was thrown in the fire for the same reason, and Allah ordered the fire to become cool for him. Years later, he was ordered to leave his wife and infant son in a lonely barren desert, and then again to sacrifice his own son. About this last test Allah Himself said:

Most of us know these stories, but it is difficult to realize what Ibrahim must have felt like in all these situations, because none of us are tested anything even close to it. But just try to imagine the inner state of the human being Ibrahim, for he was a human being after all, and imagine the strength of his piety which alone gave him the patience to come through it all with record marks.

May Allah’s peace and blessings be on them all, and may Allah allow us to follow their examples.