5 Proofs That Quran is a Timeless Miracle 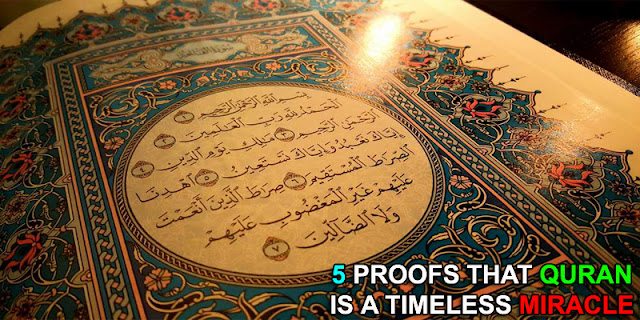 THE INIMITABLE REVELATION OF GOD:

There are many signs that indicate that Muhammad (peace be upon him) was indeed a true Prophet. The greatest of these signs is the Quran. In it Allah challenges the Arabs and others, until the Day of Resurrection, to produce something like it, as He says (interpretation of the meaning):

{And if you are in doubt about what We have sent down upon Our Servant [Muhammad], then produce a Surah (i.e. chapter) the like thereof and call upon your witnesses other than Allah, if you should be truthful.} (Quran 2:23)

And Allah says elsewhere in the Quran:

{Or do they say [about the Prophet], ‘He invented it?’ Say, ‘Then bring forth a Surah like it and call upon [for assistance] whomever you can besides Allah, if you should be truthful.’} (10:38)

The Islamic scholar Ibn al-Jawzi stated that the Quran is inimitable in several ways:

FIRST, in its eloquence and precision, its conciseness and comprehensiveness. A story might be related at length [in a place of the Quran] and then [the same story might be] repeated in condensed form [elsewhere] without losing any of its substance.

SECOND, in its dissimilarity to the styles of prose and poetry which were used by the Arabs. They failed in efforts to imitate it and acknowledged its superiority.

THIRD, in its information about nations of the past and the prophets who are known to the Jews and Christians, although the one who conveyed it (i.e. Muhammad, peace and blessings of Allah be upon him,) was illiterate and could not read or write, nor had he met with scholars or soothsayers. In fact, those Arabs who could read and write and did meet with scholars did not know [much of] the information contained in the Quran.

FOURTH, in its information about unknown events of the future, which is clear-cut evidence, since what it stated proved to be true.

To illustrate this point, Allah challenged the mankind:

{And if you are in doubt about what We have sent down upon Our Servant [Muhammad], then produce a Surah the like thereof and call upon your witnesses other than Allah, if you should be truthful. But if you do not – and you will never be able to – then fear the Fire, whose fuel is men and stones, prepared for the disbelievers.} (2:23-24)

Nobody could produce a Surah like a chapter of the Quran.

[When the nascent Muslim nation of Madinah was in a state of weakness,] Allah said:

{You will surely enter al-Masjid al-Haram [of Makkah], if Allah wills, in safety, with your heads shaved and [hair] shortened, not fearing [anyone].} (48:27)

Within several months thereafter, the Muslims entered into the city of Makkah in a state of safety.

Moreover, addressing Abu Lahab, [a leader of the pagans of Makkah], and his wife, Allah said:

Both of them died in a state of unbelief.

FIFTH, in its freedom from inconsistency and contradiction, because: {If it had been from [any] other than Allah, they would have found within it much contradiction.} (4:82)

The Prophet (peace and blessings of Allah be upon him) said:

“There was no prophet among the [former] prophets but that he was given signs which the people believed in. And indeed, I was given a revelation (i.e. the Qur’an) that Allah revealed to me. So I hope to be the one, with the most followers on the Day of Resurrection.” (Narrated by al-Bukhari and Muslim)

“The miracles of former prophets ceased with their death. So, if an atheist said today, “What proof is there that Muhammad and Moses were true prophets?” and he was told, “The moon was split for Muhammad and the sea was split for Moses” he would say, “That is impossible.”

Therefore, Allah made this Quran a miracle for Muhammad (peace be upon him) remaining forever, which shows his truthfulness after his death as well as that of the former prophets, since he confirmed their message and gave information about them.