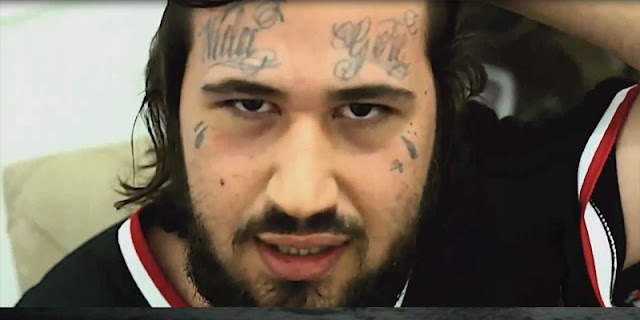 Meet Umair. He took his shahadah in Brazil. He shares his transition from street life to Islam.

Umair says that everyone on the Street has faith, we just need to reach out to them to reform and accept Islam. He says his goal is to be steadfast in Islam and to invite others to Islam by doing dawah.

The Life of Streets

This Tattoo ‘Vida Gore’ is an old concept that we got from the streets… full of fight, blood, disease… so it means ‘life is government’.

Q: What type of life did you live before Islam?

A: I used to be a DJ and producer of BIOS, I was very addicted on drugs, I used to sell drugs and completely involved in crime.

You know, people who live in the streets always have faith. Because they’re living in danger day and night… You realize what’s happening around you.

Q: So now that you became Muslim, do you have peace in your life?

A: My lifestyle changed a lot. I don’t go more to clubs, I don’t drink beer, or use cocaine…

When you revert to Islam, you are reborn. This means enough. I feel free.

Q: What do you say about that feeling that you have? Don’t you wish that your friends could have it as well?

A: Yes. This is general principle of dawah. I want to show the same thing I feel with other people. I want to see more brothers and more sisters to know about Islam.

I noticed a lot of brothers and sisters come from the street life, you know, that ability to have that peace because in the streets you already haven’t that. You’re always worried, your mind is always clouded with different drugs and substances… but that feeling that you get when you know that you have your Lord who puts this peace inside your heart. Allah says in the Quran:

That you won’t find peace in any other way.