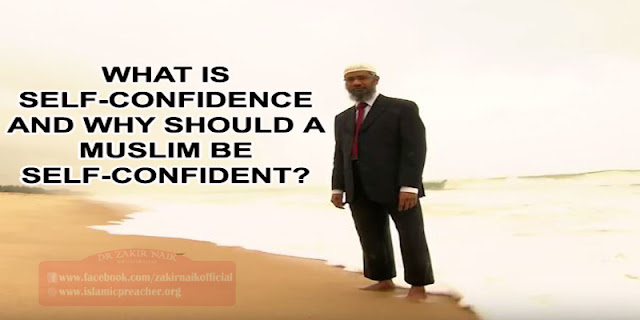 “Indeed he succeeds who purifies his ownself (i.e. obeys and performs all that Allaah ordered, by following the true Faith of Islamic Monotheism and by doing righteous good deeds).

10. And indeed he fails who corrupts his ownself (i.e. disobeys what Allaah has ordered by rejecting the true Faith of Islamic Monotheism or by following polytheism, or by doing every kind of evil wicked deeds)”

It is worth pointing out something important here, which is that for the Muslim, having self-confidence does not mean that he does not need the help of his Lord, and it does not mean that he does not need his brothers and people in general to advise him and help him. This is what the Prophet (blessings and peace of Allah be upon him) asked his Lord for, which was: not to be left to himself (or to his own devices), not even for the blink of an eye!

It was narrated that Abu Bakrah said: The Messenger of Allah (blessings and peace of Allah be upon him) said: “The supplication of the one who is in distress: O Allaah, for Your mercy I hope, so do not abandon me to myself even for the blink of an eye. Set all my affairs straight, there is no god but You.”

Narrated by Abu Dawood (5090); classed as hasan by al-Albaani inSaheeh Abi Dawood.
Al-Nasaa’i (10405) narrated from Anas, in a hadeeth that was classed as saheeh by al-Albaani in Saheeh al-Nasaa’i, that these words are to be said morning and evening.

Shaykh al-‘Uthaymeen (may Allah have mercy on him) was asked:

What is the ruling on saying “So and so has self confidence” and the like? Is this contrary to the du‘aa’ narrated in the hadeeth, “do not abandon me to myself even for the blink of an eye”?

Some of the things which we think will increase the Muslim’s self-confidence are:

When Moosa and his people fled from Pharaoh and his troops, and the two sides saw one another, we see the trust that Moosa had in his Lord. Allah says (interpretation of the meaning):

“And when the two hosts saw each other, the companions of Moosa (Moses) said: ‘We are sure to be overtaken.’

It is very important for the Muslim who is seeking ways of increasing his self-confidence not to repeat negative words, such as saying that he has no self-confidence or that he will never succeed at work.

The Muslim has to set specific goals for his life and check on the outcome time after time, because the person who is self-confident will make sure that his goal is achieved on the basis of good planning and with the help of his Lord.

The Muslim should seek righteous companions, because that will give him a motive to succeed and encourage him to make greater efforts. The righteous companions will not overlook their friend’s weak points; rather they will guide him to follow the better path. Thus good companions are one of the factors of success for the confident Muslim.

He should not be distracted by previous difficult experiences and past failures, because that will spoil his efforts and make him look down on what he has achieved of success. This is not something that the Muslim wants for himself.

Controlling one’s behaviour and actions is something that the Muslim can do and it is within his capabilities. Part of that is anger; the Muslim should be confident that he is able, with the help of his Lord, to rid himself of the evils and bad effects of anger and strive to mend his ways and discipline himself to adhere to the laws of Allah. This is something that is very easy indeed for the one who wants to achieve it, so long as he has a great deal of resolve to complete what he wants to achieve of disciplining himself and purifying his soul.

The one who wants to rid himself of anger has only to hasten to take action. This, in fact, is what we are lacking. The words are many but the actions are few. So let the Muslim who wants to purify his soul train himself to take action, do what his Lord has commanded him and refrain from what his Lord has forbidden him to do. Thus he will be one of the successful, in sha Allah.