The First Tears of the Prophet Muhammad PBUH - (Emotional) 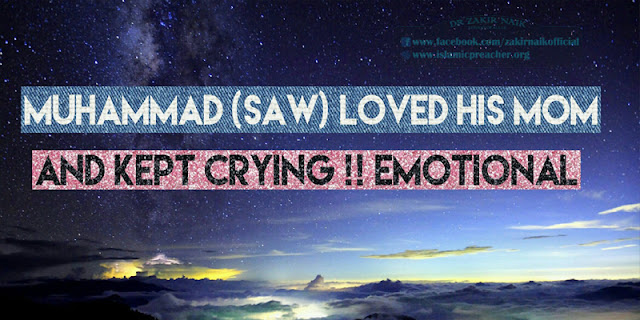 A child by the age of six years old, his father is dead. He never saw his father, he has no siblings, no uncles or aunties directly from his father. And the only encounter he sees of death is his own mother, the one whom he is attached to.

The closest person you can have is your mother, and the first encounter of death that you see is your own mother’s before your eyes in the middle of nowhere, and she is the only one you have to look after you.

Prophet Muhammad (peace be upon him) was in that position. He saw his mother turned to Barakah and her tears were flowing, her agony of pain was increasing, and she is saying to Barakah:

“You are now his mother.”

The Prophet, at six-year-old, does not know what’s happening, and then he realizes that his mother starts to take her last breath. Her eyes are open looking up into the sky, and she’s no longer communicating with the Prophet (peace be upon him).

The mother who always responded to the Prophet (peace be upon him) anytime he ever needed her, now she’s no longer responding to the Prophet. Her eyes are looking up into the sky.
What should he do?

He sees Barakah crying, and he sees his mother dead, he understands that something has gone wrong.

So the first thing he does was he jumps on to his mother, he holds on to her neck, and he starts to cry immensely on her chest (peace be upon him). He wouldn’t let go of her.

And then Barakah holds the Prophet, and he says to her:

“You are now my mother after my own mother.”

In other words, he’s trying to call out to her saying:

“Oh Barakah, you are my mother, please look after me my mother is gone. I only have you, please be my mother!”

The Prophet, at six years old, had to encounter this.

And we look at ourselves and we think we go through so much pain and struggles as if no one else is going through what we are going.

Prophet Muhammad (peace be upon him), our messenger, the most beloved to Allah is in his first tears at the age of six years old. Children of six years old in our days are playing, they’re happy, they are mocking around, they don’t know what’s going on.

But the Prophet at the age of six, an orphan, had to encounter this first encounter. How heavy would it be on a six-year-old to encounter this, but, you know, this was the first of this extreme compassion that the Prophet had to learn.
For after that, every time he saw an orphan, or a person who had lost his mother or parents, he was the first to understand their pain. He understood their pain more than what they understood.

And that was the Prophet (peace be upon him).

ALLAH WAS PREPARING HIM

Allah had prepared the messenger of Allah for the most important type of social interaction and social care, which is the care of parents and the pain of loss of family. That made him the best leader on earth to be able to connect with the people, the poor, the orphans, and those who have lost things in life.