Is Man’s Fate Pre-destined or Does He Have Freedom of Will? 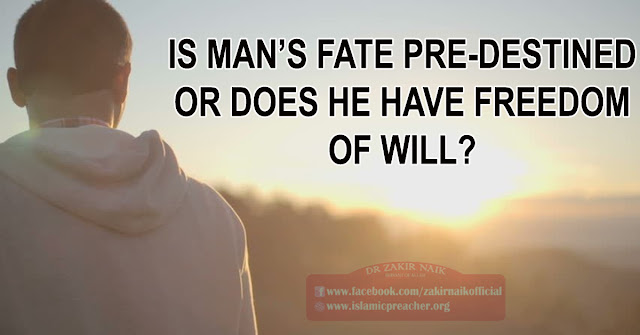 Belief in al-qadar (the divine will and decree) is one of the pillars of faith, because the Prophet (peace and blessings of Allaah be upon him) said, when he answered Jibreel’s question about faith: “(It means) believing in Allaah, His angels, His Books, His Messengers and the Last Day, and to believe in al-qadar (the divine decree) both good and bad.”

What is meant by al-qadar is that Allaah has decreed all things from eternity and knows that they will happen at times that are known to Him, and in specific ways, and that He has written that and willed it, and they happen according to what He has decreed.

Belief in al-qadar is based on four things:

1 – Knowledge, i.e., that Allaah knows what His creation will do, by virtue of His eternal knowledge.

2 – Writing, i.e., that Allaah has written the destiny of all creatures in al-Lawh al-Mahfooz.

3 – Will, i.e., that what Allaah wills happens and what He does not will does not happen. There is no movement in the heavens or on earth but it happens by His will.

The Qur’aan affirms these things in numerous verses, such as the verses in which He says (interpretation of the meaning):

“And with Him are the keys of the Ghayb (all that is hidden), none knows them but He. And He knows whatever there is in the land and in the sea; not a leaf falls, but He knows it. There is not a grain in the darkness of the earth nor anything fresh or dry, but is written in a Clear Record”

[al-An’aam 6:59]
“No calamity befalls on the earth or in yourselves but it is inscribed in the Book of Decrees (Al‑Lawh Al‑Mahfooz) before We bring it into existence. Verily, that is easy for Allaah”

“And you cannot will unless (it be) that Allaah wills the Lord of the ‘Aalameen (mankind, jinn and all that exists)”

“Verily, We have created all things with Qadar (Divine Preordainments of all things before their creation as written in the Book of DecreesAl‑Lawh Al‑Mahfooz)”

Muslim (2653) narrated that ‘Abd-Allaah ibn ‘Amr ibn al-‘Aas said: I heard the Messenger of Allaah (peace and blessings of Allaah be upon him) say: “Allaah wrote down the decrees of creation fifty thousand years before He created the heavens and the earth.” He said: “And His Throne was upon the water.”

Hence it should be clear to you that the view that al-qadar was invented by al-Jahm ibn Safwaan is a view that has no sound basis. Al-qadar was not created, rather creation comes under the heading of belief in al-qadar. Al-Jahm went to extremes in affirming the divine will and decree, and claimed that people are compelled to do what they do and have no choice. This is a false view.

The belief of Ahl al-Sunnah wa'l-Jamaa'ah is that a person has freedom of will, and hence he will be rewarded or punished. But his will is subject to the will of Allaah, and nothing can take place in the universe that is not willed by Allaah.

What some people say, that we have the choice to follow whatever path we want but at the end of this path you will find what Allaah has decreed for you, is a correct view. Allaah says (interpretation of the meaning):

“Verily, We showed him the way, whether he be grateful or ungrateful”

Shaykh al-Islam Ibn Taymiyah (may Allaah have mercy on him) said, explaining the view of Ahl al-Sunnah with regard to man’s deeds:

“To whomsoever among you who wills to walk straight.

And you cannot will unless (it be) that Allaah wills the Lord of the ‘Aalameen (mankind, jinn and all that exists)”

Marriage is one of the things that Allaah has decreed. The person whom you will marry is known to Allaah: He knows who he is, when he was born, where and when he will die, how he will be towards you, and other details. All of that is known to Allaah and He has written it in al-Lawh al-Mahfooz (the Book of Decrees), and it will inevitably come to pass as Allaah has decreed.

Because man does not know what is decreed for him, what he must do is to adhere to sharee’ah and abide by its commands and prohibitions, and to seek the help of Allaah and pray to Him for guidance (istikhaarah) concerning all his affairs, whilst implementing the means, one of the most important of which is consulting sincere people who have relevant experience.

If a righteous man proposes marriage to a woman, she should pray to Allaah for guidance (istikhaarah) and agree to marry him. If things then go smoothly, this is an indication that what is good for her is to marry him.

In conclusion, man should study the sharee’ah of Allaah and follow the commands of Allaah even if he feels reluctant, and avoid what Allaah has forbidden even if he is attached to it. All goodness is to be found in obeying sharee’ah. Allaah says (interpretation of the meaning):

He should not look at al-qadar as an excuse to ignore commands and do forbidden things, rather he should look at it in a way that will make him content with whatever painful experiences happen to him.