Is Doomsday Near? 10 Major Signs Before the World Ends 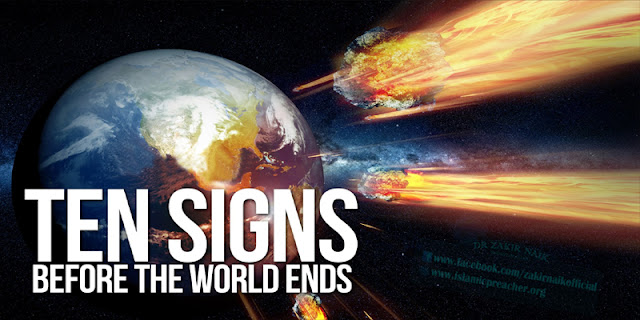 Ten major things that are connected to one other as the Prophet said in a hadith, they are like beads in a necklace, if you cut it all, the beads will start falling one after the other. And that’s how the major signs will occur. The moment one of them will occur, then the other ones will follow.

“Once Prophet Muhammad came to us, and while we were talking about the signs of the Day of Judgement. He told us

“The Day of Judgment shall not occur until you see ten signs before it: the smoke, the Antichrist, the beast, the sun rising from the west, the descent of Jesus, son of Mary, the coming of Gog and Magog, and three earthquakes (that shall shake this earth) one of them in the west and in the east and the third in the Arabian Peninsula and the 10th of them, the final one of these signs is a fire that shall appear from Yemen and it shall gather people or force them to go to their place of resurrection (meaning to actual location of where the Day of Judgment shall occur).” (Muslim)

The end times is the most dangerous time of all to live. It is the age in which mankind would be tested with the greatest of all tests and trials. Not even the companions of the Prophet would have experienced such tests and trials.

And so if you’re living in the end of times, and you’re seeing the tall buildings going up before your very eyes and you don’t wake up to understand the tests and trials which are the greatest of all, then you deserve the fate which surely awaits for you.
The major signs the Prophet described it as:

“A cable with beads, if you cut it what happens? All the beads fall but they all linked to one another, so if one come, the others follow.”

Obviously, we don’t have any precise timeline perhaps the same year… perhaps few years… only Allah knows… but the point being when one of these, the major signs come. The first of them being the coming of Antichrist, the rest shall follow very quickly.