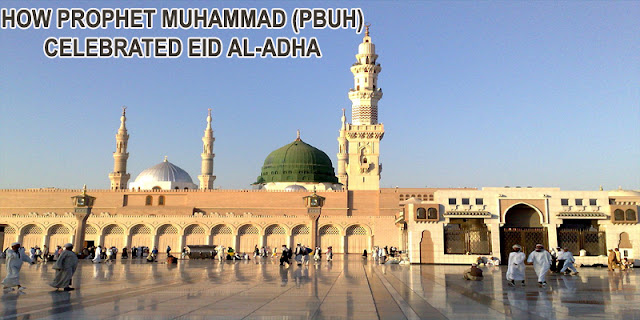 The 10th of Dhul Hijjah is the Day of Sacrifice, referred to in Arabic as ‘Yaum Al Nahr’, especially by the pilgrims who are in Saudi Arabia performing Hajj.

The 10th day of the month of Dhul Hijjah possesses many virtues: This day, on which Eid Al-Adha falls, is the greatest day of Hajj:

It was narrated that Ibn Umar said:

“The Prophet (peace be upon him) stood between the jamarat on the Day of Sacrifice during his Hajj and said:

“This is the greatest day of Hajj’.” (Ibn Majah)

It is also the greatest day of the year for Muslims around the world, i.e. those who are not performing hajj.

Prophet Muhammad (peace be upon him) said:

“The greatest of days before Allah is the Day of Sacrifice.” (Abu Dawud)

The 10th of Dhul Hijjah is indeed a great day for the pilgrims who are performing hajj because they do a multitude of unique and rare good deeds on this day, continuing to do them in the 3 days that follow it.

These great deeds are: stoning the jamarat, offering the sacrifice of an animal, shaving the head (for men) or cutting the hair (for women pilgrims), Tawaf al-Ifada (the special circumambulation of the ka’bah that is a main pillar of hajj), followed by the strenuous sa’i (walking between the mounts of Safa and Marwah).

Finally, after all these sacred and symbolic rites have been done, pilgrims perform ghusl and leave the state of ihram, which puts an end to all of its restrictions except the prohibition of sexual relations with one’s spouse.

All these important rites are carried out by pilgrims from the dates of 10th. Dhul Hijjah till the morning of the 13th of Dhul Hijjah.

Whether a Muslim is a pilgrim performing hajj, or if they are present anywhere else in the world, the days of 10th till 13th Dhul Hijjah are special days that involve the remembrance and worship of God.

They are days for expressing joy, and partaking in festivities of eating and drinking from God’s blessings, all the while proclaiming the greatness of God:

“The day of ‘Arafah, the day of Sacrifice, and the days of tashriq are our festival, O people of Islam, these are days of eating and drinking.” (Abu Dawud)

NOT EATING IN THE MORNING UNTIL THE MEAT OF THE SACRIFICE

The Eid prayer on Eid Al-Adha is offered the same way as it is for Eid ul Fitr. The day begins early with the family taking a ghusl (full bath) after Fajr prayer and putting on new clothes to proceed to the Eid prayer place, reciting takbirs along the way.

However, there is one difference on this Eid, which is called the greater of the two Eids, and that is related to the animal that has to be sacrificed after the Eid prayer:

Despite this “Day of Sacrifice” commencing the period of Eid festivities which involve eating and drinking as encouraged by the Prophet, the sunnah of the Prophet for the first part of this day is not to eat anything in the morning before or after the Eid prayer, and to break this short fast only with the cooked meat of the sacrificial animal.

This means that on the day of Eid Al-Adha, if one wants to follow the sunnah of Prophet Muhammad related to this day to earn extra rewards, one should not eat or drink anything until one’s animal has been sacrificed after the Eid prayer, and its meat (usually the liver is the first part to reach one’s hands) has been cooked.

SACRIFICE: THE DEED LOVED MOST BY ALLAH

The sooner the animal is sacrificed after Eid prayer on the morning of 10th. Dhul Hijjah, the greater the reward. However, this sacrifice can be done on any day between 10th. and 13th. of Dhul Hijjah.

EATING THE MEAT AND GIVING IT TO OTHERS

God commands Muslims to eat the meat from their sacrifices and to feed others with it in the Quran:

The Prophet liked eating meat, albeit not very often. He openly encouraged Muslims to eat from the meat of their sacrifices on Eid Al-Adha. It was narrated from Aisha that the Prophet (peace be upon him) said:

“Eat some, store some and give some in charity.” (An-Nasa’i)

This command was always applied except for just one year in his life, in which he ordered the Muslims not to store the meat from their sacrifices for more than 3 days, but to give away any that was left after those 3 days, as charity to the hungry and poor:

Narrated `Abis: I asked Aisha, “Did the Prophet forbid eating the meat of sacrifices offered on Eid Al-Adha for more than three days?”

“The Prophet did not do this except in the year when the people were hungry, so he wanted the rich to feed the poor. But later we used to store even a trotter of a sheep to eat it fifteen days later.”

She was asked: “What compelled you to do so?”

She smiled and said:

“The family of Muhammad did not eat to their satisfaction white bread with meat soup for three successive days till he met Allah.” (Al-Bukhari)

The narrations above prove that while the Prophet encouraged Muslims to eat meat on Eid Al-Adha, he himself did not eat it regularly in his daily life throughout the rest of the year. This should be a lesson for us in preventing the committing of excess in our meat intake.

The narrations above also throw light on the wisdom behind the Prophet’s command not to store the meat from the sacrifices for more than 3 days, during that particular year in which most of the Muslims were needy and starving.

He wanted the facilitation of charity and sharing during that period of hardship.

He also wanted all the meat to be consumed in order for food to be abundantly running through the community of Muslims that year, most of whom were starving, the way blood runs through all the veins of a single body to keep it thriving.

“We forbade you to eat their meat for more than three days in order that you might have abundance; now Allah has produced abundance, so you may eat, store up and seek reward. Beware, these days are days of eating, drinking and remembrance of Allah, Most High.” (Abu Dawud)

Gifting meat from the sacrifice to affluent Muslims is a proven sunnah of Prophet Muhammad. Aisha narrated:

“I was not jealous of any wife of the Prophet as I was jealous of Khadijah, and it was not because I saw her. It was only because the Messenger of Allah mentioned her so much, and because whenever he would slaughter a sheep, he would look for Khadijah’s friends to gift them some of it.” (At-Tirmidhi)