These Verses will Relieve You When You're Depressed 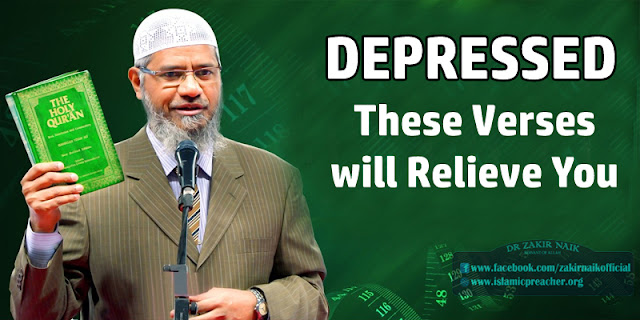 1- YOU ARE THE BEST CREATION

Let not anyone, even yourself, tell you otherwise– you are the best as long as you worship Allah. He says:

We have certainly created man in the best of stature. (95:4)

A human being can become worse than an animal, but he can also become better than angels– all you need to do is always try to be on to the form that Allah has given you.

2- SUCCESS DOESN’T DEPEND ON HOW MUCH YOU HAVE

You don’t have to have the best job, the best car, the best house, the best spouse in order to be successful. All these things which give you feelings on insecurity, they don’t count at all. So what counts? Allah describes the qualities of people who are successful:

Who believe in the unseen, establish prayer, and spend out of what We have provided for them, and who believe in what has been revealed to you, [O Muhammad], and what was revealed before you, and of the Hereafter they are certain [in faith]. Those are upon [right] guidance from their Lord, and it is those who are the successful. (2: 3-5)

3- YOU ARE FROM THE BEST NATION

From the time of Adam to the day of judgment, the best of all nations is the nation of our Prophet, and you are part of that nation.

You are the best nation produced [as an example] for mankind. You enjoin what is right and forbid what is wrong and believe in Allah… (3:110)
Imagine the joy our Prophet will feel when he sees you on the day of judgment, a part of his ummah, a successor to him on his mission. The Messenger once went to the graveyard and said:

Peace be upon you! The abode of the believing people and we, if God so wills, are about to join you. I love to see my brothers. (Sahih Muslim 249)

Who are his brothers? Not his companions, but those who believed in him without seeing him.

4- ALLAH HAS HONORED YOU

It doesn’t matter if people ignore you or disrespect you. Allah says:

You are honored by Allah. Can you understand the weight of that statement? Allah says, as recorded in a hadith Qudsi:

I will declare war against him who shows hostility to a pious worshiper of Mine. (Bukhari)

5- THIS LIFE IS TEMPORARY

No sorrow, no pain in this life is permanent. Even the people who have hurt you will perish soon. You will go to the next world soon. This message is reiterated in the Quran many times.

Let no one tell you that you shouldn’t feel pain, that if you feel sad that means there’s something wrong with your belief. What your pain indicates to is that you’re a human being, and you’re like the Prophets and pious people, who were also human beings and used to feel pain.

Take the example of Jacob (peace be upon him) who was so broken down after he lost his second son that he lost his eyesight. The Quran records this scene:

And he turned away from them and said, “Oh, my sorrow over Joseph,” and his eyes became white from grief, for he was [of that] a suppressor. They [his sons] said, “By Allah , you will not cease remembering Joseph until you become fatally ill or become of those who perish.” He said, “I only complain of my suffering and my grief to Allah , and I know from Allah that which you do not know . . .” (Quran 12: 84-86)

These are only a very few of the counsels which Quran offers in each page for sadness and grief. So make Quran a part of your everyday life to benefit from the counseling of Allah.