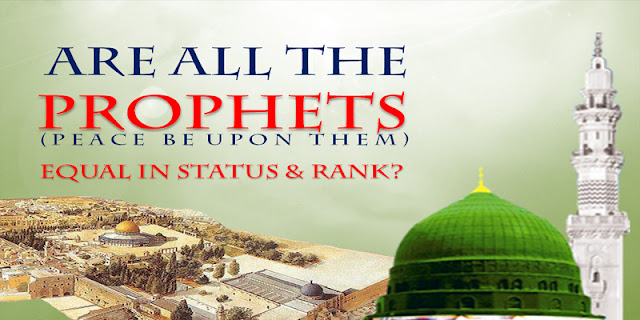 All people were created by Allaah and are His slaves; His is the power and command from eternity to eternity. Allaah, in His infinite wisdom, decreed that He should select some of His angels and prefer them over others, such as Jibreel, Mika’eel, Israafeel, Maalik, Radwaan et al., who have a higher status than others. And He, in His wisdom and justice decreed that He should select some of the children of Adam and prefer some of them over others, so that they have a higher status and better position. As Allaah says (interpretation of the meaning):

“Those Messengers! We preferred some  of them to others; to some of them Allaah spoke (directly); others He raised to degrees (of honour)” [al-Baqarah 2:253]

Allaah tells us that He chose and selected these Messengers from among mankind. After mentioning some of the Prophets and Messengers, He says (interpretation of the meaning):

“And also some of their fathers and their progeny and their brethren, We chose them, and We guided them to the Straight Path” [al-An’aam 6:87].

And Allaah says (interpretation of the meaning):

“And (remember) when Allaah took the Covenant of the Prophets, saying: ‘Take whatever I gave you from the Book and Hikmah (understanding of the Laws of Allaah), and afterwards there will come to you a Messenger (Muhammad) confirming what is with you; you must, then, believe in him and help him.’ Allaah said: ‘Do you agree (to it) and will you take up My Covenant (which I conclude with you)?’ They said: ‘We agree.’ He said: ‘Then bear witness; and I am with you among the witnesses (for this).’ Then whoever turns away after this, they are the Faasiqoon (rebellious: those who turn away from Allaah’s obedience)” [Aal-Imraan 3:81-82]
The Prophet (peace and blessings of Allaah be upon him) said to ‘Umar ibn al-Khattaab (may Allaah be pleased with him): “By Allaah, if my brother Moosa were alive, he would have no  choice but to follow me.”

All of the above refers to their status before Allaah. With regard to their religion, it is one religion, for they all called people to believe in One God, Allaah (Tawheed) and to devote worship sincerely to Him Alone. With regard to laws, each of them had his own law which was for his people alone. Allaah says (interpretation of the meaning):