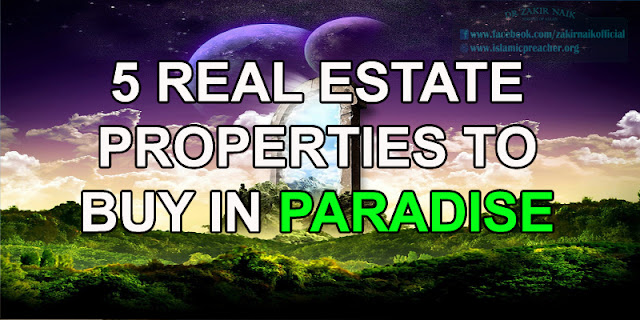 O you who have believed, shall I guide you to a transaction that will save you from a painful punishment? [It is that] you believe in Allah and His Messenger and strive in the cause of Allah with your wealth and your lives. That is best for you, if you should know. He will forgive for you your sins and admit you to gardens beneath which rivers flow and pleasant dwellings in gardens of perpetual residence. That is the great attainment. (Quran 61:10-12)

The final destination in our journey of life awaits us in the Hereafter. It’s up to us whether we book our place in Paradise or Hell. Before going there, we can buy real estate properties in Paradise by following the Book of Allah and the sunnah of the Prophet.

The Prophet specifically mentioned certain deeds by which we can buy real estate properties in paradise. Here are some of them:

Abu Umamah reported: The Messenger of Allah (peace be upon him) said:

“I heard the Messenger of Allah (peace be upon him) say:

He who builds a mosque for Allah, then Allah will build for him a similar house in Paradise. (Al-Bukhari and Muslim)
Abu Musa Al-Ashari reported:

“The Messenger of Allah (peace be upon him) said:

The Mother of the Believers Umm Habibah said:

“I heard the Messenger of Allah say:

There is no Muslim servant who prays for Allah twelve bowings every day in addition to what is obligatory except that Allah will build for him a house in Paradise.’

She then said, ‘I have never abandoned praying them after this. (Muslim)

The Messenger of Allah (peace be upon him) said:

Verily, those who love each other will look at their rooms in Paradise as if they were brilliant stars in the east or west. It will be said: Who are these? They will reply: These people loved each other for the sake of Allah the Exalted. (Ahmad)

The key to Paradise is prayer, and the key to prayer is ablution. (At-Tirmidhi)

The parent is the best of the gates of Paradise, so keep to this gate or lose it. (Ibn Majah)

When a woman prayers her five prayers, she fasts her month, she guards her chastity, and she obeys her husband, then it will be said to her: Enter Paradise from whichever gate you wish. (Ahmad)
Verily, truthfulness leads to righteousness and righteousness leads to Paradise. A man may speak the truth until he is recorded with Allah as truthful. Verily, falsehood leads to wickedness and wickedness leads to the Hellfire. A man may tell lies until he is recorded with Allah as a liar. (Muslim)

Whoever has three daughters and he cares for them, he is merciful to them, and he clothes them, then he will enter Paradise.’ It was said, ‘O Messenger of Allah, what if he has only two?’ The Prophet said, ‘Even two.’ Some of the people thought that if they had said to him one, the Prophet would have said even one. (Ahmad)

Shall I not tell you about a treasure among the treasures of Paradise? Say: Laa hawla wa la quwwata illa billah. (There is no power or might but with Allah.) (Al–Bukhari and Muslim)

Whoever visits a sick person will remain in an orchard of Paradise until he returns. (Muslim)

The area between my house and my minbar is one of the gardens of Paradise. (Al-Bukhari and Muslim)

What it means is that prayer in that part of the Prophet’s Masjid is extremely rewarding.

Whoever says: Subhanallahil ‘Adheemi wa bihamdihi (Glorified is Allah, the Most Great, and praised is He) will have a date palm planted for him in Paradise. (At-Tirmidhi)