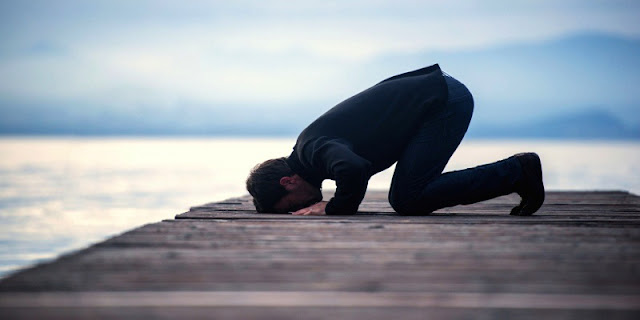 The brain has roughly 86 billion brain cells and is estimated to generate 50,000 thoughts a day. A lot of noise exists in the mind before the call to prayer (adhan) is even made. The call to prayer begins with “Allahu Akbar” (Allah is greater) to help the mind cut through and rise above this mental noise.

For the mind, body, and soul to be attentive and focused in prayer, there are practical steps a person could perform- some before the prayer. Waiting to focus when the prayer has already started will prove to be ineffective.

Water is the origin of life. It rejuvenates the body and soul. An ablution before prayer calms the muscles in the body and refreshes it. This makes the person focus better on what’s coming up next.

Ablution also has a spiritual side. When a person performs ablution their sins drop as the water drips off their limbs. The Prophet Muhammad said:

Believing that sins have shed during ablution motivates the worshiper to seek forgiveness in the upcoming prayer. If sins fall off by washing, how much more would be forgiven if the worshiper focuses and sincerely asks for forgiveness from his Lord in prayer?

2. Pray in the Mosque

Ever wondered why fasting in Ramadan seems easier than fasting any other time in the year? Acts of worship become easier to perform when people around you are also doing them. Their actions serve as an encouragement and social proof. Making salah at home tends to make one delay the prayer, risking its deadline. Having a fixed congregational time at the masjid is an appointment that one works to meet.

By going to the Mosque, the worshiper gets to put themselves into the right mindset before prayer. The worshiper realizes that they are actually visiting a House of Allah, a House of Worship. The worshiper enters this sacred place at the door with humility. The worshiper’s spiritual and emotional states begin to adjust for the prayer.

Praying in the congregation also brings about more rewards. The Prophet Muhammad said,

Looking forward to this greater reward brings the worshiper in the mood for seeking more rewards from Allah and His Mercy.

“Straighten the Rows” is what the Imam usually says before the prayer begins. That is because Allah does not look at a crooked row. An unaligned row is an indication that the worshipers are not prepared to present themselves before the King of Kings.

These few moments before the takbir (saying Allahu Akbar to start the prayer) are instrumental for focusing in prayer. Straightening the rows is a message to not just focus on the physical alignment of prayer, but also for the spiritual and emotional engagement of prayer.

Hatim al-Asam was asked about his condition during the moments before prayer. He said:

“When I stand for the prayer, I envision the Ka’bah in front of me, the Sirat (the bridge over the hell-fire) beneath me, Paradise on my right, Hell on my left, and the Angel of Death behind me.”

Hearing the takbir, “Allah is Greater” (Allahu Akbar), which signals that the prayer has begun, makes everything else at that moment not worthy of attention because Allah is Greater. At every new posture in prayer, the same words are repeated, “Allahu Akbar”, to remind the worshiper that the movements should not cause a shift in focus.

5. The Words of Salah

What are you saying in prayer? Learn what Surah al-Fatihah means. Read up on its exegesis (tafsir) and deep meanings. Scholars have mentioned that if they wanted to, they could fill the backs of camels with the exegesis of Surah al-Fatihah.

These words make the conversation between the worshiper and Allah. Knowing what they mean, saying them with genuine intent, and feeling their meanings allows the worshiper to be engrossed in prayer.

Also, learn the rest of the words of the prayer for the different postures. When the worshiper sits on the floor in front of the Lord of the Worlds and says “at-Tahayatu lillahi”, what does that mean?

The prayer is not a monologue, but an actual conversation. The worshiper converses with Allah and anticipates His responses. When the worshiper says:

{In the name of Allah, the Entirely Merciful, the Especially Merciful.

Sovereign of the Day of Recompense.

It is You we worship and You we ask for help.}

The Creator responds by saying:

My Slave has praised Me, my slave continues to praise me, my slave declares me Majestic. This is between Me and my slave, and for My slave is whatever he asks for. (Muslim)

“Allahu Akbar” is what the worshiper said to begin prayer. However, the worshiper says, “Peace and God’s Mercy be upon you all” (As-salamu alaykum wa rahmatullah) upon exiting the prayer indicating what the state of the worshiper should be at the end of prayer if it was done properly– a state of peace.

The five aforementioned steps can help one cut through noise and distraction that can exist before and during prayer. Being cognizant of the time, location, and reality that surround prayer is key to maintaining focus.