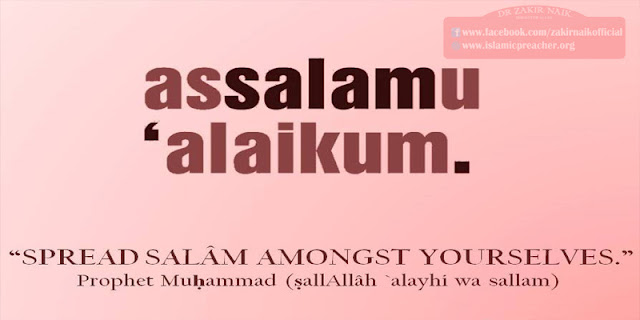 “Salaam” is an Arabic word; its literal meaning is ‘peace’. It also used for harmlessness, benefit, and protection from the evils. Salam is a name of Allah Almighty its meaning is “May the blessing of His name descend upon you.” Hence when someone greets Salaam to another it is as if he/she is saying to him/her “I am offering you safety and security and I have no intention to harm you anywhere.”

Muslims should greet each other by saying “As-Salaamu Alaikum”. One should respond with “Wa-Alaikumus Salaam”. The response of Salaam has the similar reward as of saying salaam. Saying salaam is the Sunnah but its response is a Fard. Our beloved Prophet Muhammad (SAW) said: “The person closest to Allah is the one who precedes others with greetings” (Abu Dawud). The greeting is one of the best things in Islam as Holy Prophet (PBUH) made spreading of Salaam a part of faith.

Saying Salaam is one of the rights over another Muslim as Holy Prophet (SAW) said in one of his hadith: “The Muslim has five rights over his fellow-Muslim: he should return his salaams, visit him when he is sick, attend his funeral, accept his invitation, and pray for mercy for him when he sneezes” (Bukhari).Muslims should greet another fellow Muslims no matter we know them or not. By greeting we can establish friendly relations with one another in a society. In Holy Quran Allah Almighty said about salaam in these words: “And those who believed (in the Oneness of God and His Messengers and whatever they brought) and did righteous deeds, will be made to enter Gardens under which rivers flow, – to dwell therein forever (i.e. in Paradise), with the Permission of their Lord. Their greeting therein will be, salam” (Quran, 14:23). Every one of us should make a habit of saying “As-Salaamu Alaikum”. Every time when you enter the house or see a child or an adult say, Salaam.

There are many benefits of saying As-Salaamu Alaikum some of them are given below:

1) Saying As-Salaamu Alaikum is a means of extensive reward.

2) Salaam is an aspect of Imaan. Once a man asked from Holy Prophet (SAW) about which aspect of Islam was the best then Holy Prophet (PBUH) replied: “Feeding the hungry and saying salaam to those you know and those you don’t know.”(Bukhari)

3) Our beloved Prophet (SAW) said: “When two Muslims meet (give salaam), and shake hands, they are forgiven their sins before they part (with each other)”(Abu Dawud). So we can say that As-Salaamu Alaikum is a source of getting rid of sins.

4) Saying salaam is a means of entering Jannah. Messenger of Allah (SAW) said: “You will not enter Paradise until you believe, and you will not believe until you love one another. Shall I not tell you about something which, if you do it, you will love one another? Spread salaam (the greeting of peace) among you.”(Muslim)

5) In Holy Quran, Allah Almighty says: “Then, those that feared their Lord shall be driven in companies into Paradise. When they draw near its gates will be opened, and its keepers will say to them: “Salaamu ‘Alaikum”, you have done well. Enter and live in it forever.”(Quran, 39:73). From this verse of Noble Quran, we can say that Salaam is the greeting of people of Jannah.

6) Salaam is a prayer of peace and blessings.

In a nutshell, Salaam is a blessing that Allah Almighty Himself send down for us so we should use it to get rewards from Allah Almighty. Salaam also helps us to get close to each other and also a source of removing arrogance. May Allah Almighty help us to revive the Sunnah of saying “As-Salaamu Alaikum”! Ameen