WHY DID EGYPT GOALKEEPER REFUSE MAN OF THE MATCH AWARD? 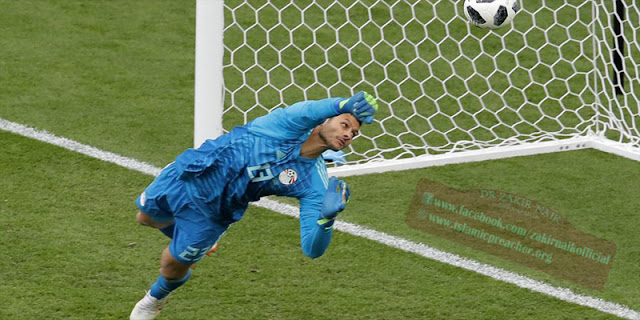 Egypt goalkeeper Mohamed El-Shenawy refused his Man of the Match award, following his incredible display against Uruguay, as the award was sponsored by beer maker Budweiser.
El-Shenawy was almost perfect against Uruguay on Friday, making save after save for 89 minutes of the match until Jose Gimenez managed to get one through and Egypt lost to Uruguay 1-0.
This fantastic performance earned El-Shenawy the coveted Man of the Match award. However, according to Twitter user Marwan Ahmed, who works for the Egyptian sports site KingFut, El-Shenawy had to turn down the award because he is Muslim.
As reported by Yahoo News, there was no alcohol actually in the award, and El-Shenawy didn’t have to drink any Budweiser to accept it (though the award is in the shape of a goblet). But since his religion forbids the consumption of alcohol, he elected not to accept the award because it was sponsored by a beer brand.
Islam takes an uncompromising stand in prohibiting intoxicants. It forbids Muslims from drinking or even selling alcohol.
The general rule in Islam is that any beverage that gets people intoxicated when taken is unlawful, both in small and large quantities, whether it is alcohol, drugs, fermented raisin drink or something else.
Alcoholic awards have been quashed in the Premier League by Muslim stars.
In 2012, Yaya Toure turned down the traditional post-match bottle of bubbly, saying: “I don’t drink because I am a Muslim, so you keep it.”
Meanwhile, a hatful of stars including Mesut Ozil and Paul Pogba are also Muslim and unlikely to accept the massive bottle of beer in Russia.