THE MIRACLE OF THE MOMENT OF CREATION 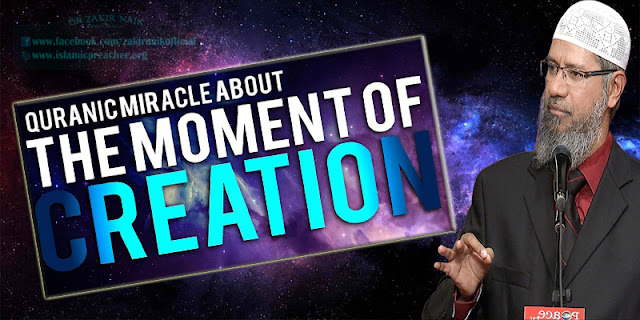 Till the beginning of 20th century the people thought that the universe is static and there is no start and end for it. It was a reason for materialism to deny the existence of the creator. But in the modern era of science, several researchers, observations, and calculation have been done which shed light on some cosmologic facts. However, science is not 100% true because there are always variations and theories but we select those evidences which are highly confirmed by science today. So one of those cosmological facts is that the universe is constantly expanding the idea of expanding universe was proposed in early 20th century by the Russian physicist Alexander Friedmann and the Belgian cosmologist Georges Lemaitre. Through some theoretical calculations they found that the universe is constantly in motion. Later on, in 1929, the concept was confirmed by Edwin Hubble.

Edwin Hubble sat there at his very big night after night studying the heavens. He found that the stars are moving apart, he wasn’t sure why but it was clear that the stars are moving further and further apart all the time. The distinct galaxies were all rushing away from us establishing that space itself is stretching, it’s expanding! Like a balloon, when you blow it just bigger and bigger, something like that is happening in the skies in the heavens these galaxies that receding from us at faster and faster speed. That means the universe is expanding the Quran mentioned 1400 years ago “AND THE HEAVEN WE CONSTRUCTED WITH STRENGTH AND INDEED, WE ARE [ITS] EXPENDER” chapter 51.

So if we reverse the expansion, the galaxies will get closer and closer until a point where they were blended together. If we continue the reversing process they would be pushed and pushed until we reach to a point, where there was nothing. “There is really nothing…. There is no space, there is no time, there is no matter, there is no energy, it’s nothing” but the potential to exist and out of that burst the universe. Well where did it take place? It took place over there, where did it take place; Actually it took place everywhere because the universe itself was extremely small at that time. It’s impossible to describe the moment of creation in human language, all we know is that from what may have been nothing, and we go to a state of almost infinite density and infinite temperature and infinite violence.

The Arabic word beda’a means a creation of something out of nothing. This word also connotes the fact that something is created not on a pattern previously designed of something but as a completely new entity having no precedence. So the greatest marvel of the creation of all concepts out of nothing. What’s amazing to me is that the laws of physics allow that to happen, it means that our whole universe, everything we see that matters does today could have arisen out of precisely nothing.

So they say that this universe came into being with a “BIG BANG” who says that? The most learned men of science, astronomers. Allah says “DO NOT THE UNBELIEVERS SEE” these Atheists these agnostics, that people who deny the existence of God, can’t they see? Here Allah (SWT) expects them to see… to be able to see… to witness “THAT THE HEAVENS AND THE EARTH WERE JOINED TOGETHER [AS ONE UNIT OF CREATION] AND WE SPLIT THEM ASUNDER” [QURAN]. Who is he (Allah) talking to? Who is he addressing? Kafir, which kafir? Beduins? Of 1400 years ago? No! He is talking to the men of science… men of learning! While now expounding to the world the theory of creation. After the explosion i.e. big bang, what should be there? Smoke of clouds of gases right? Science calls it nebula, a Nebula is an interstellar cloud of dust, hydrogen, helium and other ionized gases. Now here the Quran says “THEM HE DIRECTED HIMSELF TO THE HEAVENS WHILE IT WAS SMOKE”. So there was a smoke… the nebula but in a bigger amount cause it was a few seconds after the explosion.

Today scientists says that smoke is a more closer and more scientific as compared to gas because that time it was hot. Imagine the Quran mentions 1400 years ago which we discovered recently that the initial celestial matter of the universe, it was in the form of smoke so in a time when there was no knowledge about the formation of the universe. How could a man talk about the Big Bang, the nebula and the expanding of universe which are all confirmed by the modern science in 20th century? indeed, these facts indicate that Quran is not words of a men rather it's words of a wise creator who created the universe and knows about it in details.