THE FOUR STORIES OF SURAH AL-KAHF. 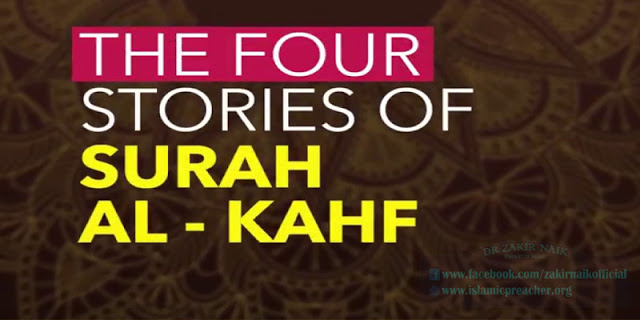 “One who memorized the first ten verses of Surah al Kahf will be secure against the Dajjal (Anti-Christ).” (Muslim)

Surah Al-Kahf is the found in Chapter 18 of the Quran. It includes four historical stories, which we can derive amazing lessons from.

This story is about a number of young men who were driven out of their homes because they believed in Allah. They ended up in a cave where Allah made them sleep for many years (309 lunar years which is 300 solar years).

When they woke up they felt they had slept for a day or half a day. One of them went to the town to get some food disguising himself thinking that the people would recognise and harm him. Only to find himself amongst a different people. The people of the town were amazed at his appearance of this man and the old coins he was using.

The story shows us how Allah protects the righteous who believe in Him no matter how hard their situation is.

The Biblical version of the story is called ‘The Seven Sleepers of Ephesus”, however, the Qur’an doesn’t mention the number of those who were in the cave.

This is a story about a man who owned two beautiful gardens, but he became arrogant and told his friend “I am greater than you in wealth and have more servants and attendants and children!!” (Quran 18:34)

The man forgot to be thankful for the bounties Allah has bestowed upon him, hence Allah destroyed his gardens.

This story is a lesson to those who take worldly matters for granted and forget that all that they have is from Allah and He is capable of taking it all away if he wills.

THE STORY OF MUSA AND AL-KHIDR – A TRAIL OF KNOWLEDGE

Prophet Muhammad said: “Once Moses stood up and addressed Bani Israel. He was asked who the most learned man amongst the people was. He said: “I.” Allah reprimanded him as he did not attribute absolute knowledge to Him (Allah). So, Allah said to him: “Yes, at the junction of the two seas there is a slave of Mine who is more learned than you.” Moses said: “O my Lord! How can I meet him?”

So Allah instructed Musa as to where to find the man who was known as “Al-Khidr”-The Green One.

Musa goes on a journey with Al-Khidr where he learns that Allah bestows his knowledge on whoever he wishes. Nobody should ever feel he/she is the most knowledgeable, as all knowledge belongs to Allah. Hence, Al-Khidr says, “…And I did it not of my own accord…” (Quran 18:82)

Dhul Qarnain was a righteous and just king, who traveled the lands from West to East. The Qur’an mentions three of his journeys.

On his last journey, he reaches a place between two mountains where he met a tribe of people. They asked him to build a wall between them and the people of Gog and Magog “Ya’juj and Ma’juj” who were causing mischief in the land. Dhul Qarnain agreed to do so.

Dhul Qarnayn was not proud of his achievements, in fact, the Quran mentions that after he built that great wall,

The Prophet taught us that

“Whoever reads Soorat al-Kahf on Friday, Allah will bestow upon him light between those two Fridays.”

(Narrated by al-Bayhaqi; classed as Saheeh by Shaykh al-Albaani in Saheeh al-Jaami‘. )

May Allah help us make Al-Kahf a regular part of our Friday routine.