THE FOUR GREATEST WOMEN IN HISTORY 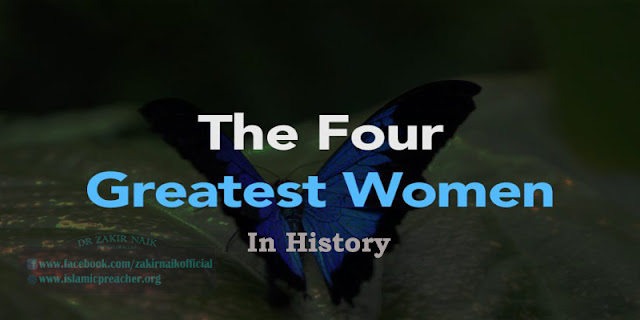 In a world where women search for inspiration from all walks of life, there are no better role models than those indicated to us by the Prophet Muhammad (pbuh)

“From among the women of the world who have reached perfection and who are worthy of following are (the following four):Miryam the daughter of Imrân; Khadija daughter of Khuwailid; Fatima daughter of Muhammad and Asiyah wife of Fir’aun” (Tirmidhi)

Let’s Take A Closer Look into The Lives Of These Women.

Khadija was a wealthy merchant who was well established in the city of Makkah. She proposed to the Prophet Muhammad (pbuh) when she was 40 years old, despite being 15 years his senior. She enjoyed a fulfilling marriage to the Prophet, and was the first person to accept Islam after he received revelation.

She went through a great amount of suffering following the Prophethood of Muhammad (pbuh) and she undertook many sacrifices to support his mission. The Prophet never forgot her great service to himself and the Islamic faith. He would in fact always remind others of her great favour years after her passing.

Aisha says in a narration:

“….The Prophet (pbuh) used to mention her (Khadija) very often, and when ever he slaughtered a sheep, he would cut its parts and send them to the women friends of Khadija. When I sometimes said to him, “(You treat Khadija in such a way) as if there is no woman on earth except Khadija,” he would say, “Khadija was such-and-such, and from her I had children.” Bukhari
The Prophet (pbuh) also informed us that it was Allah Himself who sent her glad tidings of Paradise and bestowed upon her greetings of peace.

“ I never felt so jealous of any woman as I felt of Khadija, for Allah ordered him (the Prophet (pbuh) to give Khadija the glad tidings of a palace in Paradise (for her).” Bukhari

Fatimah was the daughter of Prophet Muhammad (pbuh) and Khadijah. She was well known for her piety, modesty and faith. She would also often come to the defence of her father whenever he was attacked by those who despised his religion.

She was nicknamed “Al-Zahra” by the Prophet, which means “The Splending One”. She also married the cousin of the Prophet, Ali Ibn Abi Taleb, and gave birth to four children, Hassan, Hussain, Zainab and Um Kulthum. She lived a life of simplicity and often experienced great hardship and poverty.

The Prophet also informed her on his deathbed that she would be a leader of the women in Paradise.

“Oh Fatima would you not be pleased that you are a leader of the women of Paradise” Bukhari and Muslim.

Asiyah was the wife of the tyrant Pharaoh and lived during the time of the Prophet Moses. She in fact raised Moses herself and was a stern believer in Allah.

After Pharaoh had become aware of her devotion to faith, she suffered severe oppression. After all, it was her husband who would claim to be God himself. He eventually organised for her to be crushed by a boulder, however Allah had taken away her soul before this occurred.

She was referred to by Allah as an “example for the believers”. She had also asked Allah for a Palace in Paradise near Him and was granted this, as indicated in the Quran.

“And Allah presents an example of those who believed: the wife of Pharaoh, when she said, “My Lord, build for me near You a house in Paradise and save me from Pharaoh and his deeds and save me from the wrongdoing people.” Quran 66:11
MARYAM BINT IMRAAN

Maryam was the mother of the Prophet Jesus, who had a miraculous birth without a father. Her story is given in great detail throughout the Quran, including her religious upbringing, her miracles and also her ability to overcome the accusations of the townspeople. There is in fact an entire chapter named after Maryam in the Quran.

Allah states about her in the Quran “Allah has chosen you, purified you and chosen you above all women”. Quran 3:42

Allah also referred to her as an “example for the believers” and stated that “She believed in the words of her Lord and His scriptures and was of the devoutly obedient”. Quran 66:12