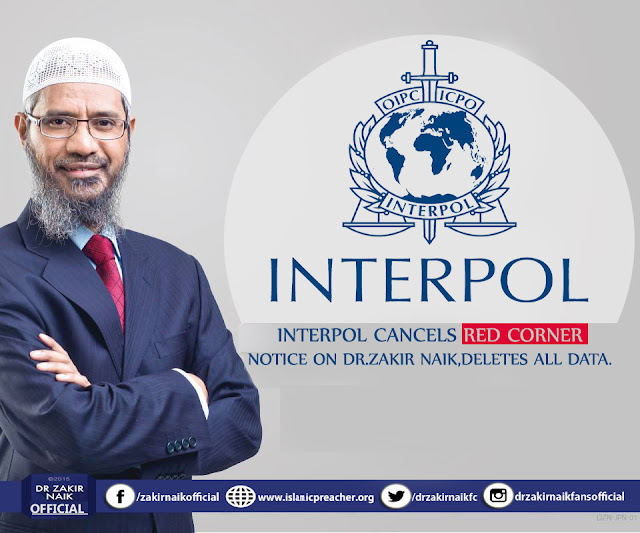 "They want to bury Islam not knowing it is a seed."

No matter how much they want to disgrace and discredit the honourable people, they wont be able to.

Allah is with the truthful.
Today half the battel is won.
Alhumdullilah.
We ask our followers to pray for Dr Zakir Naik. 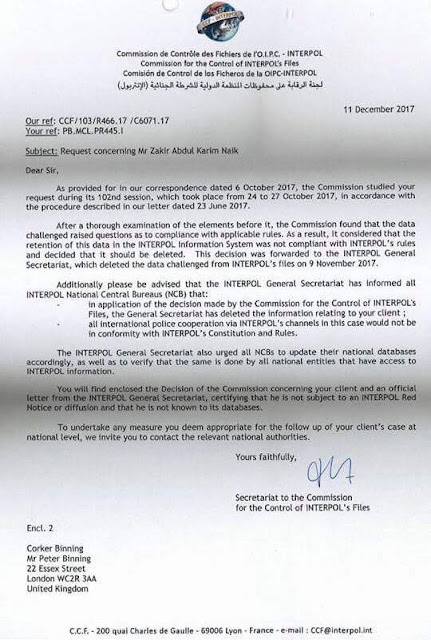 Commission for the control of interpol's files

As provided for in our correspondence dated 6th October 2017, the commission studied your request during its 102 session, which took place from 24-27 October 2017, in accordance with the procedure described in our letter dated 23 June 2017.

After a thorough examination of the elements before it, the commission found that the data challenged raised questions as to compliance with applicable rules. As a result, it considered that the retention of this data in the INTERPOL information system was not compliant with interpol's rules and decided that it should be deleted. This decision was forwarded to the INTERPOL general secretariat, which deleted the data challenged from INTERPOL'S files on November 2017

Additionally please be advised that the INTERPOL general secretariat has informed all INTERPOL national central bureaus (NCB) that:

In application of the decision made by the commission for the control of the INTERPOL'S files, the general secretariat has deleted the information relating to your client;

All international police cooperation via INTERPOL'S Channels in this case would not be in conformity with INTERPOL'S constitution and rules.

The INTERPOL general secretariat also urged all NCBs to update their national data bases accordingly,as well as to verify that the same is done by all national entities that have access to INTERPOL information.

You will find enclosed the decision of the commission concerning your client and an official letter for the INTERPOL general secretariat, certifying that he is not subject to an INTERPOL red notice of diffusion and that he is not known to its data Bases.

To undertake any measure you deem appropriate for the follow up of your client's cade at national level, we invite you contact the relevant national authorities.

for the control of INTERPOL'S files Encl.2 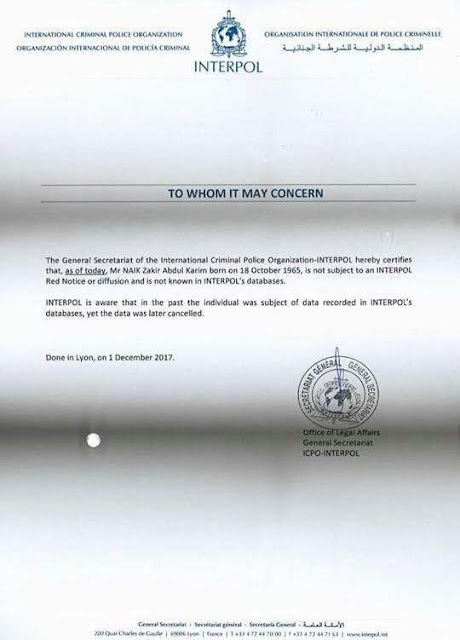 To whom it may concern

The general secretariat of the international criminal police organization- INTERPOL hereby certifies that, as of today, Mr. Zakir Abdul Karim Naik born on 18th October 1965, is not subject to an INTERPOL red notice or diffusion and is not known in INTERPOL'S databases.

INTERPOL is aware that in the past the individual was subject of data recorded in INTERPOL'S databases, yet the data was later canceled.