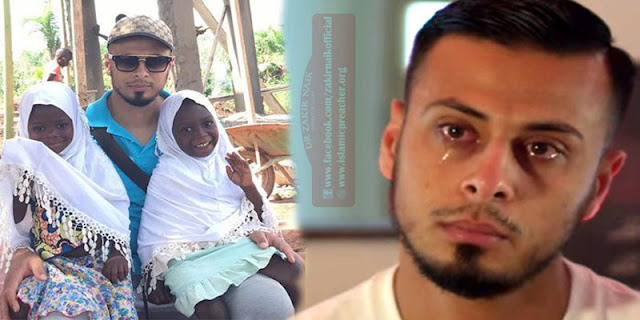 “Every time you give up something for the sake of your creator he will keep replacing it with something better” – Ali Bannat.

His charity, Muslims Around the World (MATW) helped many people in countries like Togo, Lebanon, Ghana and Burkina Faso. MATW has been changing lives of people in poverty-stricken countries.

The organization has been working on many projects in these African countries. From building schools, mosques and hospitals to providing daily meals to the poor, the work of MATW is ongoing.

Just before his death, Ali’s fund-raising efforts led to the building of a bakery in a poor village in Togo. The bakery distributes up to 5000 loafs of bread a day among the less fortunate.

“The MATW first ever bakery. When I first got to Togo, some of the tribal and less fortunate people were throwing themselves at me for a piece of bread; this was the state of poverty and Subhanallah now we have our own bakery and will produce 3-5000 loafs of bread a day to distribute to the less fortunate, may Allah keep allowing us to complete and be apart of these endless rewarding projects . Wallahi goals, goals, goals.. we all need to set the and work towards them especially now in Ramadan push yourself hard.”

During the Rohingya crisis, his organization raised money to aid refugees living in camps. The funds provided them with water, food, shelter and clothing. It also hoped to put sustainable farming for those still in Burma in place.

Just a couple of days before Ali banat’s death, he posted a video of his organization handing out food for poverty-stricken families in Lebanon.

Ail Banat said the idea of establishing the charity organization was born out of the realization that when he dies everything will be gone except for his deeds.

“It all started when I went to the cemetery where a brother that had cancer had passed away. And I was at the cemetery and I was thinking to myself after you go there’s nothing, there’s no one there for you, no mother, no father, no brother, no sister except for your deeds,” explaining that even the wealth also disappears.

We ask Allah SWT to grant our dear brother Ali Banat paradise gardens beneath which rivers flow, we ask that he fulfilled his purpose here on earth, and is rewarded with the highest rank in Jannah. (Ameen)