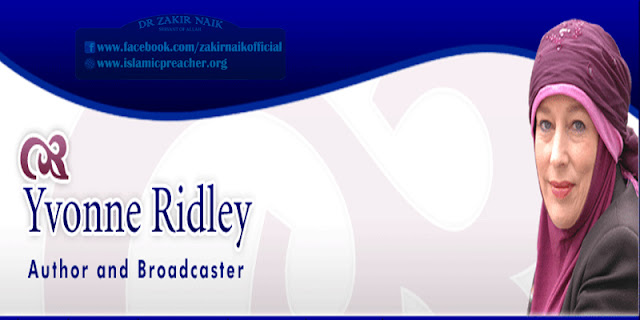 Who is Yvonne Ridley?

Yvonne was elected European President of the International Muslim Womens Union (in Special Status with the Economic and Social Council (ECOSOC) of the United Nations) at their 2010 conference in Lebanon.

Her long career as a print journalist saw her working as a senior reporter with several well-known British newspapers including The Sunday Times, The Observer, The Independent on Sunday and The Sunday Express. While working for the latter as Chief Reporter on an undercover assignment in Afghanistan immediately after 9/11 she herself became the subject of international headlines when she was held by the Taliban.

In addition to her work as an author, journalist and film-maker Yvonne is a committed peace activist, champion of civil liberties and advocate for women's rights.

She is also the Vice President and media director of the European Muslim League (EML) headquartered in Milan and Bern since its inception in 2010.

In addition to this she is also a board member of the World Federation of Arab Islamic International Schools (WFAII) which set up a UK base in 2011. In addition to this and many other projects, she is part of an ongoing peace initiative led by Lord Ahmed Nazir to bring about a Muslim-led solution to the conflict in Darfur, Sudan.

She was on the first international flotilla to sail to Gaza in 2008 - a project personally endorsed by Nobel Peace Laureates, the former US President Jimmy Carter and Archbishop Desmond Tutu of South Africa. This humanitarian mission was hailed by the then President of the UN General Assembly as "truly in the spirit of Gandhi".

Whether it is Chechnya, Kashmir, Darfur, Palestine or the illegal detention of so many innocent people in the so-called "War on Terror", a common thread runs through all Yvonne's work - social justice for all, the protection of civil liberties, the eradication of the pernicious cycle of poverty, and a steadfast commitment to the equality and empowerment of all women.

The Arab Spring enabled her to take an active role of support, which is ongoing today, in Tunisia, Egypt, Libya and elsewhere.

Yvonne continues to write regularly for the international press and she is also an accomplished documentary film-maker and has won winning several prestigious film festival awards for her work in this field through her own TV production company First Witness based in Soho, London.

She has also become a leading campaigner against the use of US drones in Afghanistan, Pakistan, Yemen, Somalia and elsewhere describing the unmanned killing machines as "beyond the rule of international law and justice". Just recently she recruited an all-women "Peace Platoon" to go to the tribal areas of Pakistan to show solidarity and support with women there who live in daily terror of the American drones.
Read Her Written Revert Story to Islam


Islam is by far the most misunderstood religion in the world today thanks to centuries of medieval-style propaganda successfully peddled by bigots and religious zealots. So I should not have been entirely surprised by the almost hysterical reaction in the mainstream media to news that I am considering becoming a Muslim. Some of the comments were (nasty) and snide, other journalists asked me stupid questions showing a distinct lack of research or understanding. One even accused me of suffering from Stockholm Syndrome as a result of spending ten days in the hands of the Taliban!

My spiritual journey, like that for many reverts, was meant to be a personal affair between myself and God. Sadly it has now become a very public issue and so I have decided to share with readers my feelings and thoughts on Islam to prevent any more misunderstandings or misconceptions.

Yes, my journey did begin in the unlikely surrounds of an Afghan prison where I was being held by the Taliban facing charges of entering their country illegally, disguised in the all-enveloping burqa. One day, during my captivity, I was visited by a religious scholar who asked me what I thought of Islam and if I would like to revert. I was terrified. For five days I had managed to avoid the subject of religion in a country led by Islamic extremists. If I gave the wrong response, I had convinced myself I would be stoned to death.

After careful thought I thanked the scholar for his generous offer and said it was difficult for me to make such a life-changing decision while I was in prison. However, I did make a promise that if I was released I would study Islam on my return to London. My reward for such a reply was being sent to a ghastly jail in Kabul where I was locked up with six Christian fanatics who faced charges of trying to convert Muslims to their faith. (After being bombarded with their bible readings, happy-clappy Christian songs and prayers twice a day, I think we can discount the accusations of Stockholm Syndrome).

Several days later I was released unharmed on humanitarian grounds on the orders of Mullah Omar, the Taliban's one-eyed spiritual leader. My captors had treated me with courtesy and respect, and so in turn, I kept my word and set out to study their religion. It was supposed to be an academic study, but as I became more engrossed with each page I turned I became more impressed with what I read.

I turned to several eminent Islamic academics, including Dr. Zaki Badawi, for advice and instruction. I was even given several books by the notorious Sheikh Abu Hamza AI-Masri whom I spoke to after sharing a platform at an Oxford Union debate. This latter snippet was seized upon by some sections of the media in such a ridiculous fashion that outsiders might have thought I was going to open a madrassa (school) for AI-Qaeda recruits from my flat in Soho!

Thankfully the support and understanding I have been given from my brothers and sisters (for I regard them as that) has been unstinting and comforting. Not one of them has put pressure on me to become a Muslim, and every revert I've spoken to has told me to take my time. One of the big turning points for me happened earlier this year when the Israelis began shelling The Church of the Nativity in Manger Square, one of the most precious monuments for Christians.

Every year thousands of school children re-enact the Nativity at Christmas time, a potent symbol of Christianity. Yet, not one Church of England leader publicly denounced the Israelis for their attack. Our Prime Minister Tony Blair, who loves to be pictured coming out of church surrounded by his family, espousing Christian values, was silent. Only the Pope had the guts to condemn this atrocity. I was shocked and saddened and felt there was no backbone in my religious leaders. At least with Islam I need no mediator or conduit to rely upon, I can have a direct line with God anytime I want.

While I feel under no pressure to revert by Muslims, the real pressure to walk away from Islam has come from some friends and journalists who like to think they're cynical, hard-bitten, hard-drinking, observers of the world. Religion of any form makes them feel uneasy, but Islam, well that's something even worse. You'd think I had made a pact with the devil or wanted to become a grand wizard in the Ku Klux Klan.

Others feared I was being brainwashed and that I would soon be back in my burqa, silenced forever like all Muslim women. This, of course, is nonsense. I have never met so many well-educated, opinionated, outspoken, intelligent, politically aware women in the Muslim groups I have visited throughout the UK. Feminism pales into insignificance when it comes to the sisterhood, which has a strong identity and a loud voice in this country. Yes, it is true that many Muslim women around the world are subjugated, but this has only come about through other cultures hijacking and misinterpreting the Qur′an.

I wish I had this knowledge (and I'm still very much a novice) when I was captured by the Taliban, because I would have asked them why they treated their own women so badly. The Qur′an makes it crystal clear that all Muslims, men and women are entirely equal in worth, spirituality and responsibility.