DISTURBED BY WASWAS AND EVIL THOUGHTS 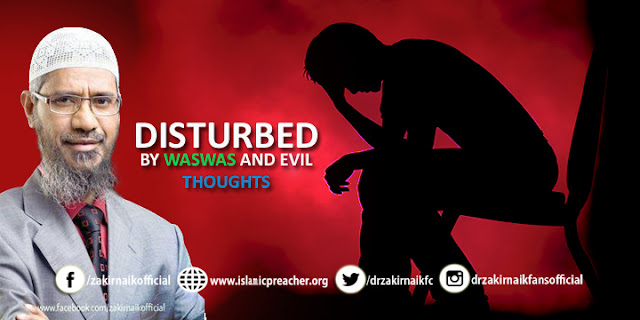 Proper focus (khushoo’) is the essence of prayer. Prayer without proper focus is like a body without a soul. The following are two of the things that help one to develop the proper focus:

1 – Striving to think about what you are saying and doing, pondering the meanings of the Quran, dhikr (words of remembrance) and du’as (supplications) that you are reciting; bearing in mind that you are conversing with Allah as if you can see Him. For when the worshipper stands to pray, he is speaking to his Lord, and ihsan (perfection of worship) means worshipping Allah as if you are seeing Him, and knowing that even though you cannot see Him, He sees you. Every time a person experiences the sweetness of prayer, he will be more inclined to do it. This depends of the level of one's faith – and there are many means of strengthening one’s faith. Hence the Prophet (peace and blessings of Allah be upon him) said, “Of the things of your world, women and perfume have been made dear to me, and my joy is in prayer.” According to another hadeeth he said, “Give us our rest through it, O Bilal (ie. with prayer),” and he did not say, give us a break from it.

2 – Striving to ward off the things that may distract you during prayer, namely thinking about things that are irrelevant or distracting. Waswas affects each person differently, because waswas has to do with a person’s level of doubts and desires and the degree to which a person is attached to other things or fears other things.

With regard to what you say about the waswas reaching such a great level that you have begun to experience waswas that makes you think about Allah in ways that are not appropriate, these are evil whispers from the Shaytan. Allah says (interpretation of the meaning):

{And if there comes to you from Satan an evil suggestion, then seek refuge in Allah. Indeed, He is the Hearing, the Knowing.} (Fussilat 41:36)
Some of the Sahabah complained about the waswas that was bothering them. Some of the Companions of the Messenger of Allah (peace and blessings of Allah be upon him) came to the Prophet (peace and blessings of Allah be upon him) and said to him, ‘We find in ourselves thoughts that are too terrible to speak of.’ He said, ‘Are you really having such thoughts?’ They said, ‘Yes.’ He said, ‘That is a clear sign of faith.’” (Narrated by Muslim).   (Narrated by Muslim, 132 from the hadeeth of Abu Hurayrah).

Al-Nawawi said in his commentary on this hadeeth (prophetic tradition): “The Prophet’s words, ‘That is a clear sign of faith’ mean, the fact that you think of this waswas as something terrible is a clear sign of faith, for if you dare not utter it and you are so afraid of it and of speaking of it, let alone believing it, this is the sign of one who has achieved perfect faith and who is free of doubt.”

And it was said that what it means is that the Shaytan only whispers to those whom he despairs of tempting, because he is unable to tempt them. As for the kafir (non-Muslim), he can approach him in any manner he wants and is not restricted to waswas, rather he can play with him however he wants. Based on this, what the hadeeth means is that the cause of waswas is pure faith, or that waswas is a sign of pure faith.

The fact that you hate that and your heart recoils from it is a clear sign of faith. Waswas happens to everyone who turns to Allah by reciting dhikr etc. It is inevitable, but you have to be steadfast and patient, and persevere with your dhikr and prayer, and not give up, because in this way you will ward off the plot of the Shaytan. {Indeed, the plot of Satan has ever been weak.} Every time a person wants to turn to Allah, waswas brings other matters to mind. The Shaytan is like a bandit: every time a person wants to proceed towards Allah, he wants to block the way. Hence when it was said to one of the salaf (pious predecessors) that the Jews and Christians say, “We do not experience waswas,” he said, “They are speaking the truth, for what would the Shaytan do with a house in ruins?”

1 – If you feel that you are being affected by this waswas, say, “Amantu Billahi wa Rasoolihi (I believe in Allah and His Messenger).” It was narrated from ‘Aishah that the Messenger of Allah (peace and blessings of Allah be upon him) said: “The Shaytan comes to one of you and says, ‘Who created you?’ And he says ‘Allah.’ Then the Shaytan says, ‘Who created Allah?’ If that happens to any one of you, let him say, Amantu Billahi wa Rusulihi (I believe in Allah and His messengers). Then that will go away from him.” (Narrated by Ahmad, 25671; classed as hasan (sound) by al-Albani in al-Saheehah, 116).

2 – Try to stop thinking about that as much as possible, and keep busy with things that will distract you from it.